Day 153 of the Invasion of Ukraine: Zelensky calls for New Sanctions against Russia over the Gas Racket 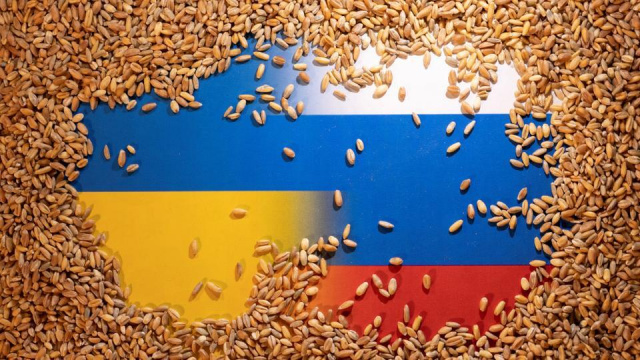 Zelensky calls for new sanctions against Russia over the gas racket

Ukrainian President Volodymyr Zelensky has called on Europe to respond to the gas war waged by Russia by increasing sanctions against Moscow.

"Today we heard new gas threats heading to Europe. Despite the concession regarding the Nord Stream 1 turbine, Russia will not resume gas supplies to European countries, as it is contractually obligated to do," Zelensky said in his daily video message.

"This is an open gas war that Russia is waging against a united Europe. The Russians do not care what will happen to the people, how they will suffer - from hunger because of the blockade of the ports, from cold in winter, or from poverty, or from occupation. These are just different forms of terror," Zelensky said.

"That's why you have to respond to this. Don't think about how to get the turbine back, but strengthen the sanctions," he said.

Zelensky was referring to Gazprom's announcement of a new drastic reduction in gas supplies to Europe. Russia has already cut supplies twice in June, saying Nord Stream 1 could not function normally without a turbine that was being repaired in Canada and could not be returned to Russia because of Western sanctions. . After that, Germany and Canada agreed to return the equipment to Russia, but the turbine has not yet been delivered, AFP recalls.

Western countries accuse Moscow of using the energy weapon as punishment for sanctions they have imposed on it since the start of Russia's invasion of Ukraine.

Meanwhile, German Economy Minister Robert Habeck accused Russian President Vladimir Putin of a "hypocritical game" over cutting gas supplies from Russia due to what Moscow said were problems with a repaired turbine in Germany.

On the occasion of Moscow's decision to reduce the flow of blue fuel through the Nord Stream 1 pipeline, Habek told DPA:

"There are no technical reasons for cutting deliveries. The turbine is ready to be delivered to Russia."

According to him, the export documentation of "Siemens Energy" is ready, but the Russian side refuses to prepare the import documentation. The energy branch of "Siemens" has confirmed that they are ready to transport the repaired facility immediately after the preparation of the necessary documents.

"Russia violates contracts and blames others," Habek stated and added: "Putin is playing a 'hypocritical game.'

The Kremlin rejected earlier criticism by German Chancellor Olaf Scholz about Russia's reliability as a supplier of natural gas.

"These statements are in absolute contradiction with the reality and history of deliveries," Kremlin spokesman Dmitry Peskov told Interfax.

He stressed that Russia has no interest in stopping natural gas flows to Europe and that it is "a responsible gas supplier and whatever is said by the European Commission, in European capitals or in the US, Russia has been and remains the country that largely guarantees Europe's energy security".

Peskov said the situation could change if the EU continues to strengthen sanctions against Russia. Regarding Nord Stream 1 deliveries, Peskov assured that the new turbine will be installed as soon as Siemens Energy provides the relevant documents. The Kremlin spokesman hinted that there were other failures on Nord Stream 1 and that this was well known to Siemens.

Turkey: The grain export deal could end the fire between Russia and Ukraine

Turkey believes that the deal on the export of grain from Ukraine could lead to a ceasefire between Russia and Ukraine, Anadolu Agency reported, citing a statement by Turkish presidential spokesman Ibrahim Kalan.

"I don't want to sound too optimistic here, but this grain agreement could actually lay the groundwork for the kind of trust that we talked about earlier - which could lead to renewed negotiations on a ceasefire, on a prisoner exchange, maybe, even for a peace settlement," Kalan said in an interview with CNN.

Kalan said it was too early to say what might happen, but stressed the need to build on the agreement. He urged the international community not only to praise the achievement of the grain corridor agreement but to try to build on it through positive steps.

Regarding Saturday's Russian strike on the Ukrainian port of Odessa, Callan said Turkey was in close contact with both Moscow and Kyiv.

"...such attacks must be avoided and we will watch very closely," he said, adding that Ankara was urging all parties to respect the agreement.

He said he was counting on Russia to implement the agreement, adding: "at least that's what we're hearing from them."

"We hope the first ships will start sailing in the next week or two. The sooner the better, of course. But it depends on how quickly the Russian and Ukrainian sides will be ready to start sending their ships," the spokesman said.

Regarding the demining of the Black Sea ports, Callan stated, "...I understand that they don't want to demine all of Odessa, fearing that Russia will try to invade...”

Kalan added that if Ukraine asks Turkey for help, Ankara will be ready to help and clear the corridor. "...but for now they seem to be fine on their own," he added.

Russia: The bombing of Odessa will not affect grain exports

The strike by the Russian armed forces on military infrastructure in the seaport of the Ukrainian city of Odessa cannot and should not affect the start of grain loading as agreed in Istanbul. Kremlin spokesman Dmitry Peskov told journalists yesterday, TASS reported.

The strike "is solely related" to military infrastructure.

"This in no way has anything to do with the infrastructure that is used to fulfill the arrangements and transport the grain. Therefore, something like this cannot and should not affect the beginning of the loading process at all," said Peskov.

The Ukrainian military, quoted yesterday by local media and Reuters, said the Russian missiles did not hit the port's grain warehouses or cause significant damage. Authorities said preparations to resume grain exports are ongoing.

"We are continuing the technical preparations for the start of the export of food products from our ports," wrote the Minister of Infrastructure Oleksandr Kubrakov on Facebook.

The President of Russia does not plan to visit Japan to participate in the state funeral of former Japanese Prime Minister Shinzo Abe. The level of Russian participation will be determined later, the Kremlin representative said.

"Putin will not leave," he said in response to a TASS question.

This was in the early hours of the day when, according to comments made earlier by Ukrainian President Volodymyr Zelensky, the country's grain exports across the Black Sea could resume following the deal agreed by Ankara with Kyiv and Moscow. However, according to the UN, this step is a matter of days.

There were also strikes last night on Ukraine's second-largest city of Kharkiv, in the northeast, while fighting continues for Bakhmut and Sloviansk in the Donetsk region.

The strikes on coastal villages in Odessa region, according to regional administration spokesman Serhiy Bratchuk, were carried out by strategic bombers.

According to the mayor of Mykolaiv, Oleksandr Senkevich, there are no reports of casualties in the attacks with S-300 anti-aircraft missile systems launched from occupied Kherson. However, the Ukrainian army reports an attack on port infrastructure.

No casualties were reported in either case, but this is the second such attack on a southern Ukrainian port since Saturday (after the signing of the deal).

The United States has expressed concern over previous attacks on the port of Odessa over the weekend, which the White House said called the grain deal into question, and the situation will be closely monitored. Russia explained that military infrastructure was targeted.

Today, Russian Foreign Minister Sergey Lavrov continues his African tour with Ethiopia and Uganda. In the process, he tried to convince leaders of a constructive Russian position given the economic fallout from the grain freeze and the spike in fuel prices in recent months.

Ukrainian President Volodymyr Zelensky on Monday signed a decree to appoint a new commander of the Special Operations Forces (SOF), a branch of the Armed Forces of Ukraine.

According to the decree, published on the presidential website, Viktor Khorenko was appointed the commander of the SOF. Ukrainian lawmaker Oleksiy Honcharenko wrote on Facebook that Khorenko previously served as a commander of the special reserve of the Main Intelligence Directorate of the Ukrainian Defence Ministry.

Khorenko will replace Hryhorii Halahan, who was dismissed by Zelensky earlier in the day.

Last week, Zelensky dismissed Prosecutor General Iryna Venediktova and head of the Security Service of Ukraine Ivan Bakanov, blaming them for insufficiently dealing with a large number of traitors in their agencies.