Day 147 of the Invasion of Ukraine: Putin threatens Europe with High Energy Prices 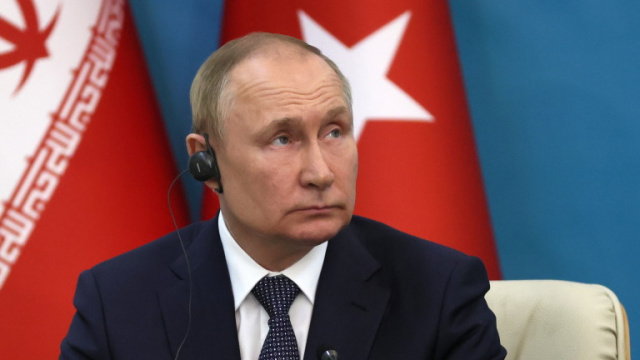 “The flow of Russian gas to European customers has fallen because of the West itself”, Russian President Vladimir Putin has said, warning that supplies may continue to shrink.

The EU fears that Russia may stop gas supplies to provoke economic and political chaos in Europe this winter, the Associated Press notes, cited by BTA.

Putin told Russian media in Tehran, where he was meeting the leaders of Iran and Turkey, that the amount of gas transported through the Nord Stream 1 pipeline to Germany would continue to fall, from 60 million to 30 million cubic meters per day, if the turbine is not quickly replaced.

He added that Russia could put into operation the recently completed Nord Stream-2, but only with half of its planned capacity, as the remaining amounts of gas are used for domestic needs.

The Russian leader also warned the West that a plan to cap the price of Russian oil as part of sanctions against Moscow over its invasion of Ukraine would destabilize the global oil market and lead to a spike in prices.

"We are hearing some crazy ideas about limiting the volumes of Russian oil and a limit on the price of Russian oil. The result will be the same - price inflation. Prices will skyrocket," he said.

North Korea may send workers to two Russian-controlled territories in eastern Ukraine, according to Russia's ambassador to Pyongyang, a move that would challenge international sanctions against the North's nuclear weapons program, Britain's “Guardian” reported.

Matsegora has said there are potentially "many opportunities" for economic cooperation between the North and the self-proclaimed republics in Ukraine's Donbas region despite UN sanctions.

He stated in an interview with the Russian newspaper Izvestia that "highly skilled and hardworking Korean builders who are capable of working in the most difficult conditions could help us rebuild our social, infrastructural and industrial facilities."

His comments come days after North Korea became one of the few countries to recognize the two territories, accusing the Ukrainian government of being part of Washington's "hostile" stance towards Pyongyang.

The Ministry of Foreign Affairs of the North stated:

"Ukraine has no right to raise an issue or challenge our legitimate exercise of sovereignty after having committed an act that grossly lacks fairness and justice between states by actively joining the unjust and illegal hostile policies of the United States in the past."

In response, Ukraine severed diplomatic ties with North Korea and accused it of undermining Ukraine's sovereignty and territorial integrity.

Ukrainian Foreign Minister Dmytro Kuleba said Russia's appeal to North Korea for support showed that Moscow "has no more allies in the world, other than countries that depend on it financially and politically."

Ukraine has already suspended political and economic contacts with North Korea as part of UN sanctions aimed at pressuring Pyongyang to halt its nuclear weapons and ballistic missile programs.

North Korea has traditionally earned much-needed foreign currency by sending its citizens to work abroad. Under UN sanctions, they were due to be repatriated by the end of 2019, but a significant number of North Korean workers have reportedly continued to work in Russia and China, as well as Laos and Vietnam, past the deadline.

Relations between Russia and North Korea are reaching "new strategic heights" and entering a period of prosperity. This was announced today by the North Korean Foreign Ministry on the occasion of the anniversary of Russian President Vladimir Putin's visit to Pyongyang and the signing of a joint declaration, TASS reported.

"Today, relations between Russia and the DPRK are reaching new strategic heights, their development is entering a flourishing period in accordance with the agreements reached by leader Kim Jong Un and President Vladimir Putin during the historic meeting in Vladivostok in April 2019," it is said in the message.

"In particular, the strategic and operational cooperation between the countries continues to grow in terms of categorically not accepting the arbitrariness and hegemonic actions of the US and its satellites, in terms of resolutely countering aggression and external threats, in terms of protecting security, sovereignty and (national) interests," Pyongyang said.

The North Korean Foreign Ministry also stressed that North Korea "stands in solidarity with the righteous actions of the Russian leadership to eradicate political and military threats and blackmail from hostile forces and to protect the dignity, interests, peace and security of the country."

Pyongyang also pointed out that the Russian Federation and the DPRK cooperate on the international stage based on the principle of mutual respect and are united in not accepting double standards in world politics.

Putin, Raisi and Erdogan discussed the fight against terrorism and Syria

Russia, Turkey and Iran vowed to continue their cooperation to "eliminate terrorists" in Syria in a tripartite statement after the three countries' presidents met in Tehran.

President Recep Tayyip Erdogan stressed Turkey's determination to purge terrorist groups, such as the YPG/PKK, from Syria, as terrorists pose the biggest threat to peace in Syria and the region.

Speaking at a trilateral summit with his Iranian counterpart Ebrahim Raisi and Russian counterpart Vladimir Putin, Erdogan said Ankara expects its Astana partners to sincerely support its efforts to establish peace and stability in northern Syria.

"If there is peace in Idlib now, it is thanks to the Astana process," he said.

For his part, Raisi said that the fate of Syria must be decided by its people, without outside interference.

"Tehran supports a political solution to the Syrian crisis," he added.

The three countries "reaffirmed their determination to continue their ongoing cooperation with the aim of definitively eliminating terrorist individuals, groups, enterprises and entities, while ensuring the protection of the civilian population and civilian infrastructure in accordance with international humanitarian law," the joint statement said.

The three leaders discussed the situation in northern Syria, stressed that permanent security and stability in this region can only be achieved on the basis of preserving the country's sovereignty and territorial integrity, and agreed to coordinate their efforts in this direction, the statement said.

They "expressed their disapproval of the illegal seizure and transfer of oil revenues that should belong to Syria," the statement added.

The countries also promised to strengthen their trilateral economic and political cooperation and agreed that the next meeting of participants in the Astana process will be held in Russia.

On the other hand, Turkey, Russia and Iran have condemned the Israeli military strikes in Syria and said the strikes are considered a "violation of international law, international humanitarian law, sovereignty and territorial integrity of Syria," while describing the strikes as "destabilizing" the region.

Ukraine is working on imposing sanctions against relatives of Russian military personnel, said Andrii Yermak, head of the office of the Ukrainian president, in an interview with the Ukrainian "Radio HB".

"I want today every soldier who set foot on our soil, his relatives, his children, his family also to be on the sanctions lists," he said. According to him, this is difficult to achieve from a legal point of view, but the matter is being worked on.

According to Ermak, if a Russian soldier is fighting against Ukraine, his children should not study in Western countries, TASS notes. He expressed hope that in the future Kyiv will be able to implement such sanctions. 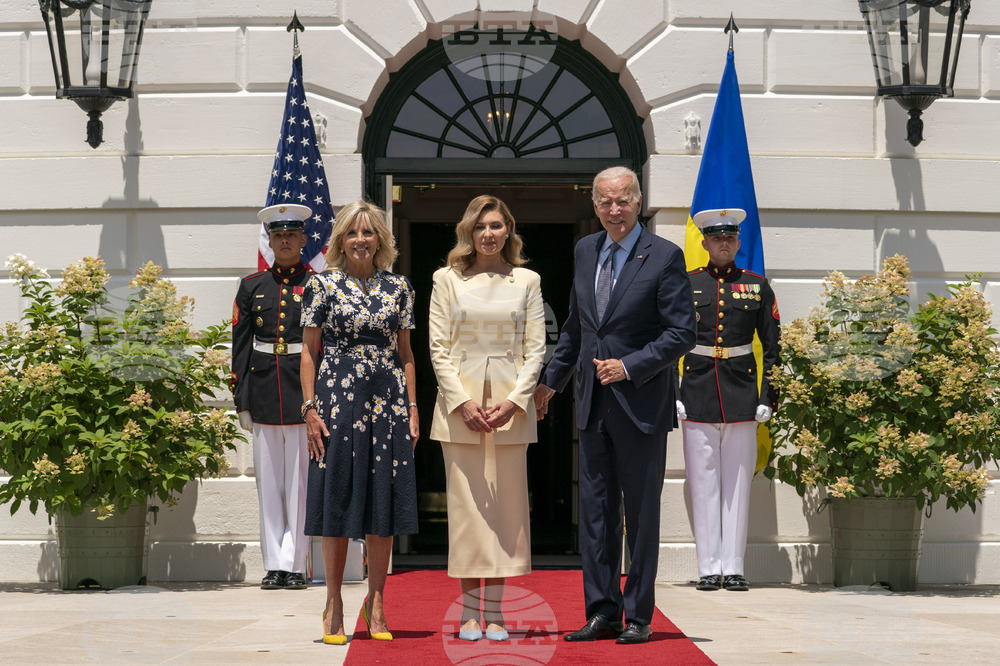 US President Joe Biden, with a bouquet in hand, together with First Lady Jill Biden, yesterday welcomed Ukraine's First Lady Olena Zelenska at the White House, where she arrived for a visit before her speech to the US Congress scheduled for today, Reuters reported.

Zelenska, the wife of Ukrainian President Volodymyr Zelensky, hugged Jill Biden and received the bouquet from the president, who met her motorcade outside the White House. Afterwards, the two first ladies and delegations from both countries held a meeting in the Blue Room at the White House. Jill Biden has already met with Zelenska, during her surprise visit to Ukraine, where she visited a school where Ukrainian refugees had taken shelter.

"When I came back, one of the things I said was you can't go to a war zone and come back without feeling the grief and the pain of the people," Jill Biden said at the start of their meeting. She added that she has discussed with her team how to help provide mental health treatment for mothers and children who are victims of atrocities.

Zelensky said he expected "significant results" from his wife's meetings in Washington. Her tasks are to increase support for Ukraine in the US, win additional support for "protecting the people from Russian terror" and increase humanitarian aid, he said in his evening video address. He said the speech to Congress would be important, adding that he "strongly" believed it would "be heard by the decision-makers in the United States."

Russian President Vladimir Putin said today that Moscow has not seen Ukraine's willingness to fulfill the terms of a preliminary peace deal, which he said was agreed in March, Reuters reported.

In comments to reporters after his visit to Iran, Putin said Saudi Arabia and the United Arab Emirates had offered to mediate between Russia and Ukraine. When asked if a meeting with Ukrainian President Volodymyr Zelenskyi was possible, Putin replied that Kyiv had not fulfilled the terms of a preliminary peace agreement, which, he said, was "practically" agreed upon in March.

"The final result of course ... depends on the willingness of the contracting parties to implement the agreement they agreed on. Today we see that the forces in Kyiv have no such desire," Putin said.

In March, negotiations were held at which both sides made proposals, but no result was reached, Reuters recalls. Then Zelensky said that only a specific result of the negotiations can be trusted.

Putin met with Iranian Supreme Leader Ali Khamenei in Tehran yesterday and the two deepened ties between the two countries, which are subject to Western sanctions. In Iran, Putin also met with Turkish President Recep Tayyip Erdogan, with whom he discussed a deal to resume Ukrainian grain exports through the Black Sea, currently blocked by Russia. Putin said Russia was ready to facilitate the passage of Ukrainian grain across the Black Sea, but also wanted the remaining restrictions on Russian grain exports lifted.

Syria announced today that it was severing diplomatic relations with Kyiv as a reciprocal measure to the similar step taken by Ukraine at the end of June, after the Syrian government recognized the independence of the pro-Russian separatist republics, reported AFP.

"The Syrian Arab Republic has decided to sever diplomatic relations with Ukraine in accordance with the principle of reciprocity and in response to the decisions of the Ukrainian government," a Syrian foreign ministry source was quoted as saying by state news agency Sana.