The Macedonian Parliament accepted the French Proposal after fierce Debates 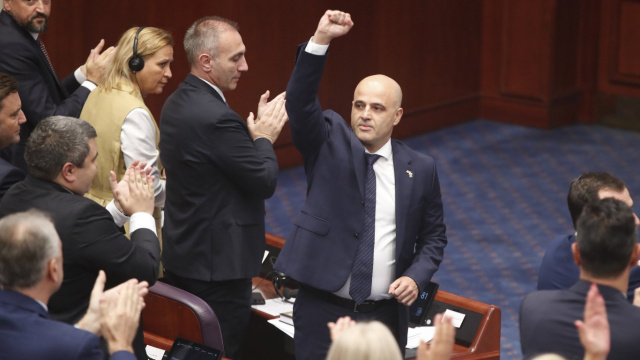 With 68 votes "in favor" and none "against" and in the absence of MPs from the main opposition party VMRO-DPMNE and the small "Levitsa" formation, the parliament adopted draft conclusions, with which the cabinet is given direction on what it can and cannot negotiates in the European integration process.

Albanian parties, regardless of whether they support the government, voted in favor and secured a majority in the 120-member legislature.

This was the actual vote for the "French" proposal - as a month ago, the Bulgarian parliament assigned the government in Sofia a position on the set of documents drawn up by the former EU Council presidency.

The decision, taken after fierce debates, opens the door for the start of negotiations with the European Union, albeit symbolic, since the actual process will require changes to the constitution to add the Bulgarian community to it.

As soon as the constitutional process is completed, the European Union will be ready "without delay" to start substantive negotiations. This is the outcome of a tense stage in the dispute between Sofia and Skopje after Bulgaria blocked the start of the Macedonian negotiations in November 2020 by not approving the negotiating framework.

The de facto veto was based on conditions set unilaterally in 2019, which North Macedonia failed to meet as it did not make a time-bound commitment to them. In the demands, Sofia saw an opportunity to implement the 2019 Good Neighbor Agreement, which it claimed Skopje was violating; on the other side of the border, the conditions were seen as an assault on Macedonian identity.

The most delicate request, that of refraining from using "Macedonian language" as a concept in European documents, was dropped. However, Bulgaria will not be asked to recognize the language, nor does the European Union deny its existence, although the opposition VMRO-DPMNE tried to convince the Macedonians otherwise.

During the debates, VMRO-DPMNE tried to silence every word of the rulers with vuvuzelas. A deputy from the party even set fire to a copy of the "French" proposal, and the entire debate - which began on Thursday - was accompanied by street protests.

VMRO-DPMNE insists that the "French" proposal leads to the "Bulgarianization" of North Macedonia. The governors asked for it to be adopted after they received a version of it in late June with cosmetic changes to reflect the government's requests.

The President of the European Commission, Ursula von der Leyen, arrived in Skopje especially for the beginning of the debates.