President Radev: Bulgaria categorically Supports the Integration of Montenegro in the EU 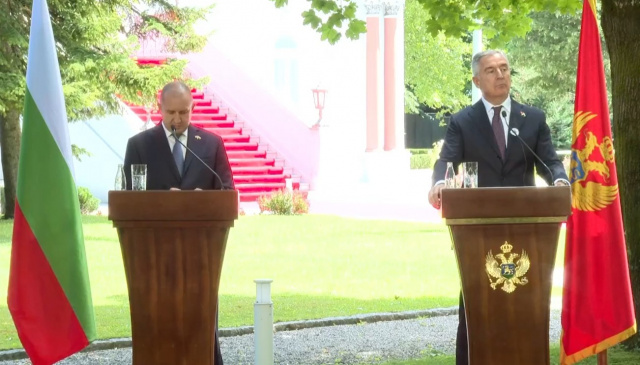 President Rumen Radev is on an official visit to Montenegro. He was welcomed today by Montenegrin President Milo Djukanovic at the presidential palace in the historic capital of Cetinje.

“For Bulgarians, Montenegro is a friendly country with which we are connected by centuries-old cultural, historical and spiritual ties. Today we share a common vision for the European perspective of South-Eastern Europe”, the Bulgarian president said after the meeting with his colleague.

"I am here to confirm my country's firm support for Montenegro on its European path. Montenegro is the most advanced country in the EU enlargement process and we look forward to welcoming you as a full member of the European family soon." Rumen Radev turned to his Montenegrin colleague.

“The great support of the Montenegrin citizens for their country's European membership is the surest guarantee for the neutralization of any attempts at foreign interference”, Radev stressed.

"Bulgaria is ready to help with expertise to strengthen the institutional capacity of Montenegro to solve all important issues not only in the accession process but also after it," he assured.

“In times of security crisis, energy shock, growing inflation, food crisis knocking on the door and possible new migration flows to the EU, the key to success is cohesion, solidarity and interaction between all countries in the region”, the president also noted.

Radev wished success to Montenegro, which takes over the presidency of the South East European Cooperation Process (SEECP).

"It is crucial that our countries raise the focus of the EU and NATO on our region so that we have a proactive policy that not only combats the consequences of the crises but also does everything possible to prevent the aftershocks of all global crises," the president said.

For his part, President Milo Djukanovic stated that EU enlargement is important both for Europe and the Balkans. The EU's biggest investment for peace and stability in Europe would be the integration of the Western Balkans, he commented.

"That is why it is important for our neighbors to know the history of the region, to know its deficits and to correctly assess what is needed for its development. There should not be a vacuum in geopolitics," Djukanovic stressed.

During his official visit, Rumen Radev will also hold meetings with the Speaker of the Parliament Daniela Djurovic, as well as with Prime Minister Dritan Abazovic.