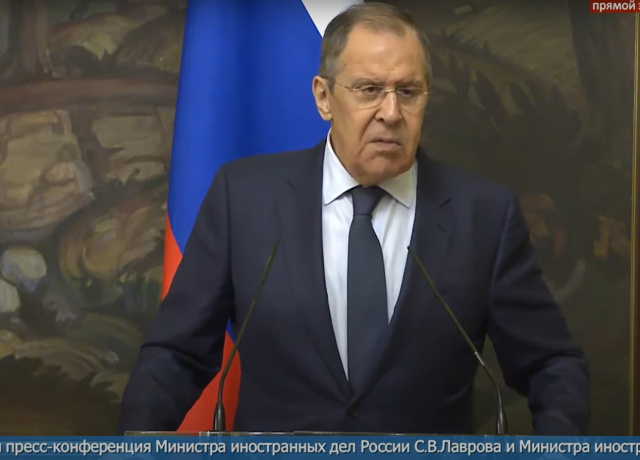 Russian Foreign Minister Sergey Lavrov said today that the country's embassy in Sofia cannot work normally at the moment. According to him, the decision to expel dozens of diplomats and administrative officials is an "illegal mess up" of a prime minister with a "pro-American orientation".

At a press conference in Moscow with his Venezuelan colleague Carlos Faria, the Russian diplomat explained that the majority of the expelled officials ensured the normal functioning of the embassy.

"Now, after this farce, completely illegal in our estimation, in the estimation of the Ministry of Foreign Affairs, the embassy is not able to work normally. Technically even now," Lavrov said.

Asked if he was planning to close the embassy, ​​he replied without thinking that "the comment is obvious - this is not an independent decision of the prime minister, who has a categorically unequivocally pro-American orientation, he is ready to fulfill any orders from his sovereign".

"The challenge", Lavrov explained, was “to kill the Bulgarians' historical memory, to destroy the foundation of relations hardened in a joint struggle for independence and many other situations, including in recent history. There was nothing special in this, it was simply Washington's policy, spread in other countries - to kill the historical memory of other peoples in the Balkans, mainly the Orthodox peoples”.

The Russian Foreign Minister also stated that the decision was met "with surprise in Bulgaria itself, which is not based on the procedures established in the country for such kind of sudden actions". "Of course, we will respond in a mirrored manner," he concluded.

The thesis of expelling the Russian officials without evidence is not new and is not only related to the June 28 decision. In front of BNT Ambassador Eleonora Mitrofanova repeated this rhetoric with calls to show on what basis such a drastic move is made. World practice is for no country to provide facts and details as they may reveal sources and networks of its security services.

On February 25, the day after the Russian army invaded Ukraine, Lavrov was sanctioned by the European Union. All his bank accounts are blocked and it is prohibited to provide him with any financial means or assets, directly or indirectly. He is prohibited from traveling within the territory and transiting through EU skies by land, air and sea.

By virtue of these sanctions, in early June, Bulgaria did not allow the passage of a plane carrying Lavrov on his way to visit Belgrade.

Read how many times were diplomatic relations between Russia and Bulgaria severed here.