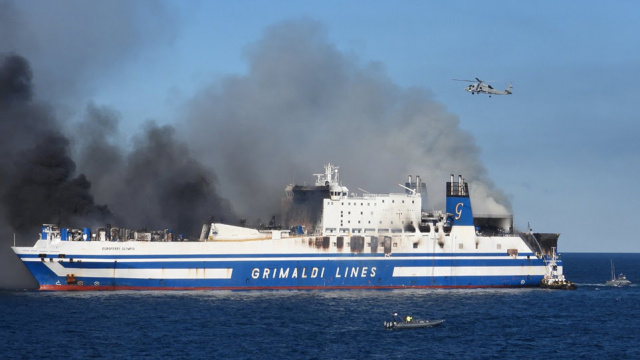 The 36 drivers from a Plovdiv transport company who were rescued from the ferry are already traveling to Bulgaria by bus from Igoumenitsa. The transport is provided by their employer. The Bulgarian consul in Thessaloniki has guaranteed that all those left without documents will be able to cross the border without any problems.

Bulgarian MFA: 7 Bulgarians are Missing after the Ferry Fire near Greece

The last Bulgarian taken out of the burning ferry was Alexi Penev, 64 years old. He spent more than 10 hours with a Turkish truck driver in a room at the back of the ship, which was inaccessible due to the flames. The rescuers reached him thanks to the information provided by the Bulgarian side.

“We kept in touch with him on the phone until the end and he said the colleague gave up, it was obviously really scary. They were in a room where there was air coming from outside, fresh air, the authorities themselves started pouring water to lower the temperature and they were worried that water was entering in their compartment, they thought the ship was sinking, but it was good that we kept in touch with the driver and informed him what was being done,” said Ilian Filipov, owner of a transport company.

The man is currently in hospital. The company will provide a psychologist to work with the victims. One of the drivers told BNT that they were scared by the experience. They are grateful to the crew who did not allow any panic on board.

“About 30-40 minutes of the whole procedure and this is thanks to the crew, who worked quickly, did not allow any panic and chaos, thanks to them we are alive and well,” said Rumen Cholakov, driver.

People who are left without documents will cross the border with their ferry ticket. Photos of Bulgarian citizens who are sought out by their relatives have appeared on social networks.