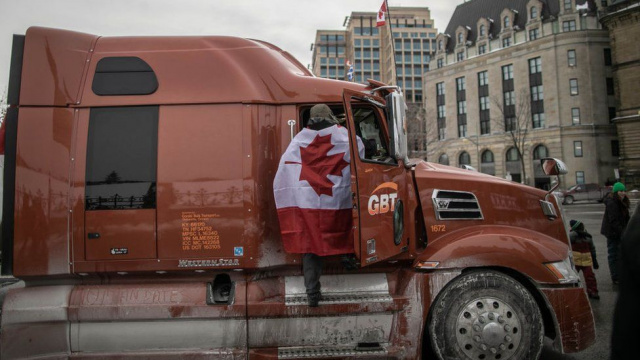 Dissatisfied Canadian truck drivers blocked the busiest checkpoint on the US border today. Canadian Prime Minister Justin Trudeau will meet with lawmakers later in the day to discuss the growing crisis, Reuters reported.

Drivers are demanding the abolition of the Canadian government's requirement to vaccinate against COVID-19 for crossing the border. The first protesters arrived in Ottawa on January 28 and gradually captured the center of the Canadian capital.

State of Emergency in Ottawa over the Freedom Convoy

Once the police have slowly begun to return the control of the situation, protesters, many of whom demand Trudeau's resignation, redirected their attention to the bridge connecting the Canadian town of Windsor and the American city Detroit.

Trucks began blocking traffic last night, and this morning a Canadian government website showed that the bridge was closed in both directions.

Trudeau, who spent 10 days in isolation after being infected with COVID-19, is due to go to the Canadian Parliament's House of Commons today to face opposition lawmakers who want him to do more to resolve the crisis. The situation was described as “national humiliation”. However, the government insists the police should be able to restore order.