Bulgaria: Yellow and Orange codes for Heavy Snowfall on Wednesday 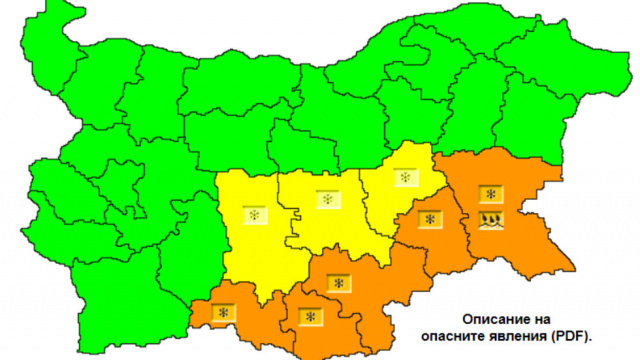 The National Institute of Meteorology and Hydrology (NIMH) announced a yellow and orange warning code for heavy snowfall and snow cover in eight areas of the country on February 2nd. This is what the map shows with the warning codes for dangerous meteorological phenomena, published on the NIMH website.

The districts of Burgas, Yambol, Haskovo, Kardzhali and Smolyan have an orange warning code for snowfall. There, the amount of precipitation per day is expected to reach 30-40 liters per square meter and to form about 15-20 cm of snow cover.

Sliven, Stara Zagora and Plovdiv also have a yellow code for tomorrow. The expected amount of precipitation for the day in the southern regions of these areas will be up to 20-25 liters per square meter and will form a snow cover of 10-15 cm. In their northern regions, the snow cover will be up to 10 cm.