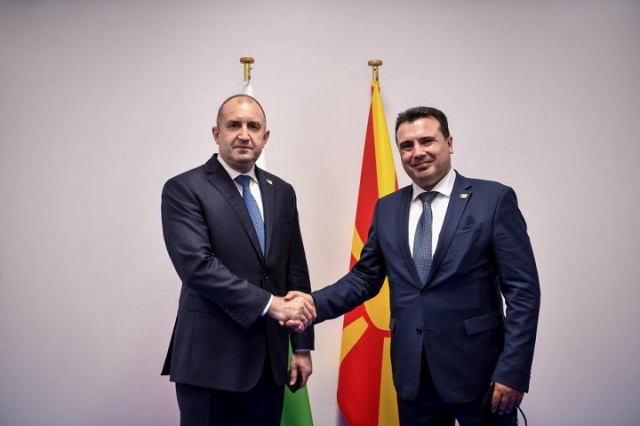 The prospects for taking a real step forward when it comes to the European integration of the Republic of North Macedonia was the central topic of a conversation that the country's Prime Minister Zoran Zaev and Bulgarian President Rumen Radev had at the conclusion of the NATO summit in Brussels.

PM Zaev is set for a visit to Sofia, which should take place this week. According to a statement by the government's press office, President Radev stressed Bulgaria's unwavering support on principle for the EU future of the Republic of North Macedonia as well as Sofia's expectations for a direct and active political dialogue aimed at finding solutions to the existing open questions in the two nations' bilateral relations.

“Both Rumen Radev and Zoran Zaev underscored the positive signal in the context of bilateral relations that the leaders of the Republic of Bulgaria and the Republic of North Macedonia sent by paying a joint visit to Rome and the Vatican in May to honour the work of the brother saints Cyril and Methodius,” the statement reads.

During the meeting, an emphasis was placed on the shared will to achieve sustainable and irreversible results in building good neighbourly relations between Bulgaria and North Macedonia in order to meet public expectations in both countries.

Bilateral partnership in the field of security and defence and the opportunity to expand cooperation in military training and cadet exchange between the two countries were also among the topics discussed by PM Zaev and President Radev in Brussels.