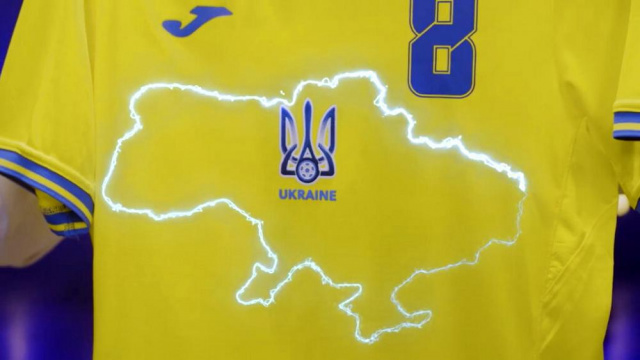 The Russian Football Union (RFS) argues that this "goes against the basic principles" of the Uefa.

The shirt, with a map showing Russian-annexed Crimea as part of Ukraine, earlier provoked anger in Moscow.

Uefa told the BBC the jersey "has been approved by Uefa, in accordance with the applicable equipment regulations."

Russia annexed the Crimean peninsula from Ukraine in 2014, and considers it a part of its territory, something rejected internationally.

The head of the Ukrainian Football Association (UAF), Andriy Pavelko, revealed the kit in a video on his Facebook page on Sunday, just days before the European Championship kicks off.

The front of the yellow and the away blue shirts show the contours of Ukraine in white, including Crimea and the eastern regions of Donetsk and Luhansk, which have been partially seized by pro-Russian separatists.

A slogan on the back reads "Glory to Ukraine!" and another one - "Glory to heroes!" - is stitched on the inside of the shirt collar.

The slogans are now used as official military greetings in Ukraine, and were a rallying cry by protesters who forced out pro-Moscow President Viktor Yanukovych in 2014.

The motto's origins are rooted in Ukraine's decades-long anti-Soviet insurgency.