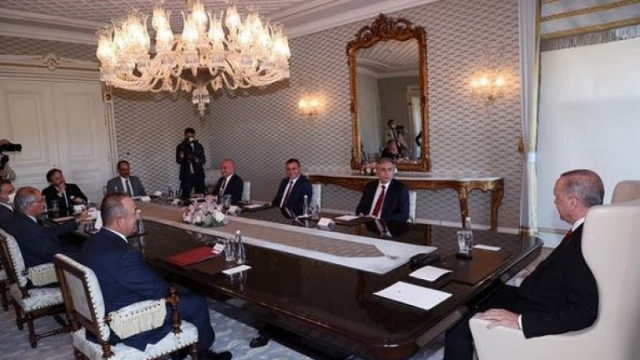 Turkish President Recep Erdogan extended an invitation for a meeting to the leadership of the Movement for Rights and Freedoms (MRF) long time ago and the date had been fixed for after snap parliamentary elections in July. However, the surprise US sanctions made Mustafa Karadayi to pay an urgent visit to Turkey- the dynamics of the processes, which are unusual for a pre-election situation and resemble events from the dawn of democracy, have prompted Mustafa Karadayi to go to Ankara with his closest entourage, told bTV journalist Ilhan Andai, who is closely monitoring the processes within the MRF.

In his words, the Turkish ambassador to Bulgaria plays a major role in arranging the visit, she wants to restore the bridge between the two countries. Ahmed Dogan has not attended the talks in Ankara for a long time, the authorities there do not want a dialogue with him, but they also do not want to miss the dialogue with ethnic Turks.

Andai also analyzed the black list of people banned from entering Turkey after the elections, which has been curtailed, but Dogan and Peevski are still on it, everyone else have been removed and there are currently many MRF activists in Turkey who after the Karadayi-Erdogan meeting are working in the constituencies.

What is the purpose of the MRF visit to Turkey - "For Dogan the most important thing is the electoral arithmetic, which he announced to the electorate using philosophical terminology, the strike against Peevski will incur losses inside Bulgaria, so he seeks electoral reserves, and they are in Turkey and Western Europe.

It is very difficult to return migrants who are not dependent from Europe, but the displaced Turks are expelled and the connection will not be severed, they see MRF as the closest political entity - we lose a certain amount of votes in Bulgaria but we garner other votes in Turkey, so the party would remain a weighty factor in parliament, according to the journalist.

MRF has long stopped being the party of electorate living in remote forlorn villages, these people already survive on their own, they follow the events and analyze them, the journalist is adamant. No one knows what the important people in Erdogan's team have said about the details of how the perfect electoral machine will help MRF achieve the desired election result in Turkey in order to step firmer into parliament and enter it through the main entrance, he added.

"This noise, which is yet to be heard, will send up the nationalists' rating in the long run," Andai said.