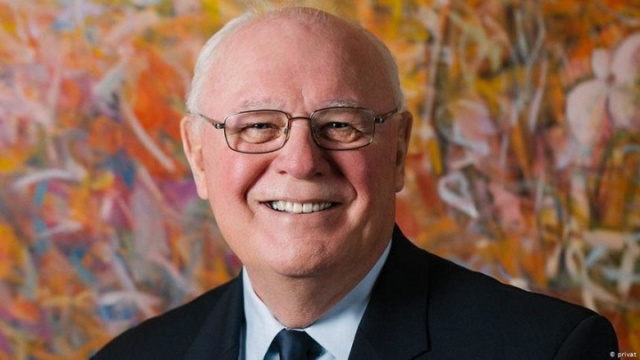 Following his commissioning as an officer, Pardew, who joined the ROTC at university and was a US War College graduate, served in intelligence in Vietnam and subsequently in several other countries.

His posts included Director of Foreign Intelligence and Chief of Current Intelligence at the Pentagon. The recipient of four decorations, he left the military in 1994 with the rank of colonel.

He went on to serve as the US negotiator in the process that resulted in the Ohrid Agreement in 2001 in today’s Republic of North Macedonia. That agreement averted a deepening of conflict in the region.

During Pardew’s term as US ambassador in Sofia, Bulgaria joined Nato and agreed with the US on a joint military training facility in Bulgaria.

In confidential diplomatic communications disclosed by Wikileaks, Pardew was forthright about the issue of organised crime and corruption in Bulgaria.

In 2005, he wrote that “despite continuing pressure from the US and the EU, past Bulgarian governments have done little to reduce the presence of organized crime.

“As a result, OC has increased its influence and is able to operate with virtual impunity. The Bulgarian public recognizes OC’s corrupting influence, and people are clearly frustrated by the government’s inability or unwillingness to deal with the problem.”

This cable made specific mention of Vassil Bozhkov, who was among those announced in the past week as subject to US sanctions.

At the end of his term as ambassador to Bulgaria, Pardew received the country’s highest state honour, the Stara Planina first degree.

After leaving office, Pardew was openly critical of Boiko Borissov, who first became Prime Minister of Bulgaria in 2009.

Writing in Politico in September 2020, Pardew said that it was “high time that Europe makes it clear that it stands by the people of Bulgaria and their plea for real democracy, and takes concrete steps to help them achieve that goal”.

“Borissov created a system with many of the hallmarks of a one-party state. He has effectively destroyed the country’s political opposition through the widespread use of intimidation, local corruption and alleged vote-buying on a massive level in communities,” Pardew said.

By coincidence, the date of Pardew’s death, June 2, was the day on which the US announced sanctions on Delyan Peevski, Bozhkov and others for what it called their extensive roles in corruption in Bulgaria.