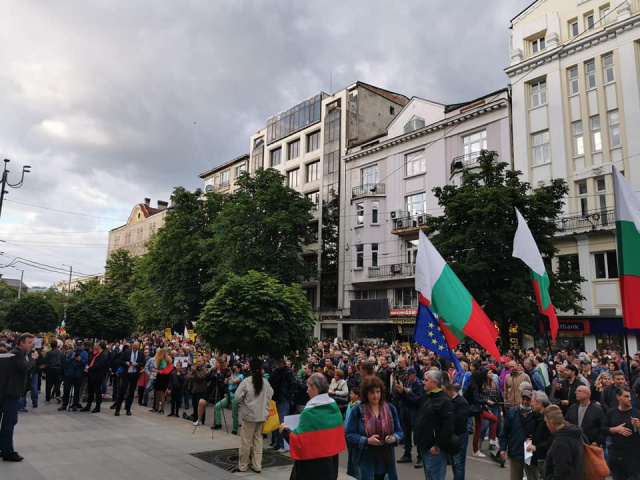 Many more people came tonight to another protest in front of the Sofia Court House demanding the resignation of Chief Prosecutor Ivan Geshev.

However, the organizers of the civil initiative "Justice for Everyone" did not give the microphone to any of them and stressed that the event belonged to the citizens.

However, everyone was thrilled by the news for corruption sanctions against Delyan Peevski and Vasil Bozhkov imposed by the US government under the Magnitsky Act.

A letter from Bulgarians living in Brussels was read from the rostrum of the steps of the Court House. It was an expression of sympathy with the "protests against Ivan Geshev and the mafia that took over our Bulgaria."

The organizers of the protest contacted the dozen protesters standing in front of the entrance of the Supreme Prosecutor's Office in the Judicial Chamber by phone, asking Ivan Geshev to resign.

There were no police at the event, but people protested peacefully and waved Bulgarian flags and posters for Geshev's resignation.

Domestic » Be a reporter: Write and send your article
Tags: Justice for Everyone, Geshev
Advertisement
Advertisement
Expats.bg All Are Welcome! Join Now!
Related Articles:
More from Domestic