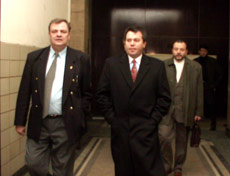 Pavlov said he had no conflicts with former Prime Minister Andrey Lukanov. The businessman said he had only professional contacts with Lukanov. Six months before the murder, Pavlov sensed a kind of nervousness in Andrey Lukanov but thought that it was a result of the political life that he led. During the murder, Iliya Pavlov was in Palma de Majorka to attend a meeting of Multigroup management.

Lukanov, once a member of the Moscow-trained Bulgarian communist elite, served as government head for the Socialist Party from 1989 to 1990. At the time of the slaying he was a lawmaker for his party. Lukanov was murdered on October 2, 1996 in front of his home in Sofia.