Prince Romanov at Mass in Sofia 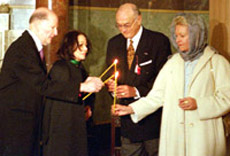 Later on, they visited a museum exposition dedicated to 125th anniversary since the San Stefano peace treaty that brought liberty to Bulgaria.

He was personally invited by Bulgaria's Prime Minister Saxe-Coburg to attend the celebrations on the liberation of Bulgaria from Turkish rule by the Russian army. The ancestors of the prince took part in the Russian Turkish War (1876-1878).

On March 3d when Bulgaria celebrates its national holiday, Prince Romanov and his wife will visit Gabrovo and mount Shipka. They will stay in Bulgaria till March 5th and will also visit Stara Zagora, Blagoevgrad and the Rila monastery.

Prince Dmitry Romanov is a close friend of Simeon Saxe-Coburg. Their grandmothers are sisters.

The father of Prince Dmitry Romanov is a remote cousin of the last Russian Emperor Nikolay. The Prince is chairman of the Russian Foundation "Romanovi."