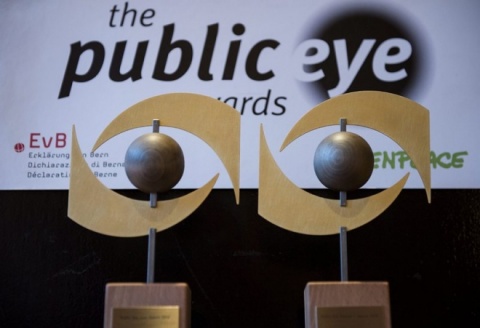 The Berne Declaration and Greenpeace Switzerland gave away the 2014 Public Eye Awards during the World Economic Forum in Davos, Wednesday.

The Public Eye Awards are given for the cases of human rights violations, disregard for environmental protection and sustainability by corporations.

The winners of the anti awards this year are the American textile giant Gap and Russian Gazprom.

Gap received the Jury award for their continuous refusal to contribute to effective reforms in the textile industry.

Russian Gazprom has been nominated by Greenpeace Russia for its oil drilling in the arctic sea and was was given the People's award with over 95,000 votes.

The Public Eye, held every year since 2000, is a counter-event to the annual meeting of the World Economic Forum (WEF) in Davos.

The project involves non-governmental organizations from around the world and is coordinated by Swiss organizations Berne Declaration and Greenpeace Switzerland.

The Public Eye is a platform for substantial criticism of "purely profit-oriented globalization".

The focus of the Public Eye Awards since 2005 has been on Corporate Social Responsibility.