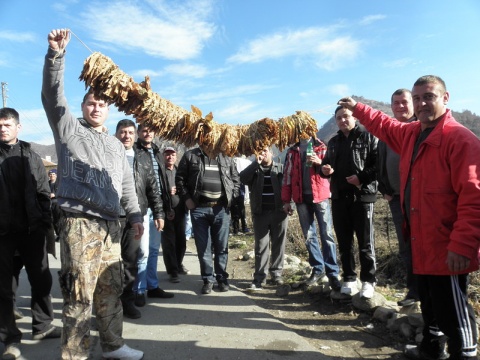 Protesting Bulgarian tobacco growers from southwestern Bulgaria have staged Thursday a huge rally in the village of Kochan, near the town of Gotse Delchev.

The public radio, BNR, reports that the central square of the village is overflowing as thousands have already arrived from all villages in the region.

For weeks now, disgruntled tobacco growers have been staging protest rallies blocking the road to Gotse Delchev and Drama (Greece). Some have even stopped their children from attending school and are setting their crop on fire in sign of protest.

They insist on prices of no less than BGN 6.50 per kilogram. Tensions among them escalated after the first days of 2014, when the belated purchase campaign finally began, but at a much lower price than expected - about BGN 5 per kilogram.

On Wednesday, people in Kochan have already prepared piles of tobacco to be set on fire. The demonstrators are joined by their children, who are missing classes, and are shouting in support and delivering speeches from the makeshift stand.

Members of the Parliament and representatives of the Agriculture Ministry are expected to arrive and announce measures to compensate the sector such as legal amendments that will grant to the tobacco growers the right to sell 10% of their production as cut tobacco without excise duty and an increase of state subsidy by BGN 1 per kilo.

These measures are not yet official.

The tobacco growers want subsidies that would cover the difference between current purchase prices and the price they are asking.

The Deputy Speaker of the Parliament Aliosman Imamov, MP Ahmed Bashev, and representative of the Agriculture Ministry, Dzhevdet Chakarov, all from the predominantly ethnic Turkish party Movement for Rights and Freedoms (DPS) are expected in Kochan.

Meanwhile, managers of companies that purchase tobacco say they are working at full speed and explain the lower prices with the low quality of this year's tobacco.

The growers, however, insist exactly on the contrary.