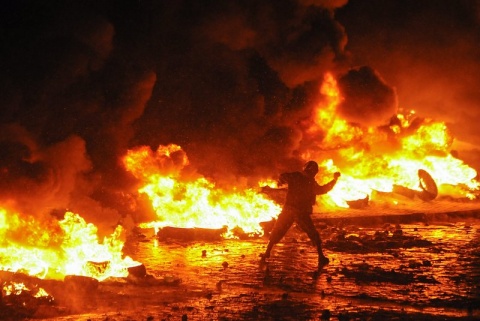 The standoff between protesters and police in the Ukrainian capital Kiev remained overnight and continues into Thursday morning.

Protesters constructed barricades, piled up stones or threw them at police, while the authorities responded with fire hydrants and flash grenades, the Kyiv Post revealed.

Screaming “Murderers” at the uniformed, civilians ripped out pavement stones to use as weapons. Bags filled with snow were piled up for barricades.

This comes just a day after 5 demonstrators lost their lives in the capital. Circumstances surrounding their deaths are still unconfirmed. The government denies allegations that police used real bullets to fire at the crowd.

The violence, which broke out on January 19, was prompted by the Ukrainian government’s newly passed laws, which give the police increased power to fight and detain protesters, as well as hefty fines and jail sentences for those who disobey.

There are no reported fatalities in Wednesday night and Thursday morning’s protests.