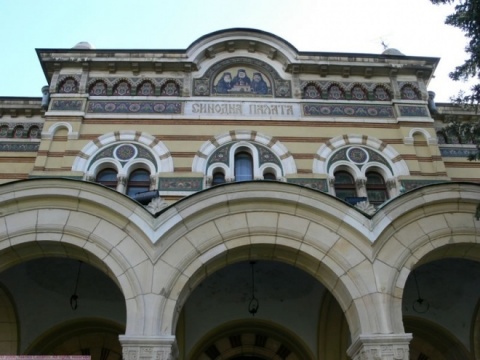 The headquarters of the Holy Synod of the Bulgarian Orthodox Church in downtown Sofia, file photo

Bulgaria's Melnik Bishop Serafim is the new Metropolitan of Nevrokop.

After tallying the votes of the Holy Synod for the two contenders to lead the Nevrokop eparchy, the result ended up being a tie – 6:6 from a total of 12.

Patriarch Neofit, however, is entitled to a second vote, which he cast for Serafim.

The Metropolitan-elect of Nevrokop will be ushered in his Metropolitan Cathedral on Monday, January 20.

Bishop Serafim was born in the village of Zornitsa, near the Black Sea city of Burgas, in 1974 with the secular name Dinko Dinkov. He graduated from the Forestry University in the capital Sofia with a major in "Landscape Architecture" in 1997, and in 2011 – from the Faculty of Theology at Sofia University.

In 1997, he entered as novice the monastery "St. Georgi" in the town Hadzhidimovo. In November 2000, he was ordained deacon by Nevrokop Bishop Nataniel and archimandrite in December 2000.

In September 2008, Serafim was appointed abbot of Rozhen monastery. In December 2011, he became bishop of Melnik and Vicar of Nevrokop Metropolitan Nataniel.

On December 17, 2013, he was elected by the diocesan council in Varna as one of the two finalists for the post of Metropolitan of Varna and Veliki Preslav.

Vidin Metropolitan Dometian was temporarily in charge of the Nevrokop eparchy after Metropolitan Natanail passed away in November 2013 and vacated the post.

On Sunday, January 12, Serafim and Branits Bishop Grigoriy were elected finalists to run for the post of Nevrokop Metropolitan in Bulgaria.