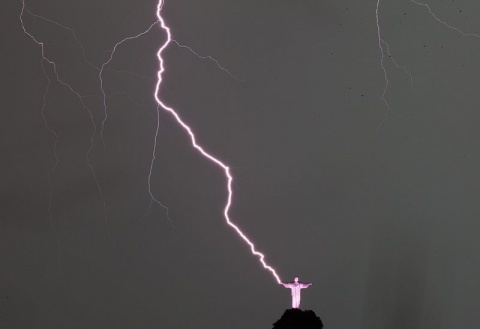 View of lightning that strikes next to the statue Christ the Redeemer in Rio de Janeiro, Brazil, 16 January 2014. EPA/BGNES

The statue of Christ the Redeemer in Rio de Janeiro has sustained a broken finger from lightning that struck it, informed world agencies Saturday.

A heavy electric rainstorm raged over the major Brazilian city on Thursday, causing power cuts for many households.

The world famous Jesus statue, rising over a 700 m hill above Rio was damaged by another storm last December, when another finger was torn off.

The figure last underwent restoration in 2010, when work worth some USD 4 M repaired damages to the face and arms.

The local parish is expected to start new restoration work in February.