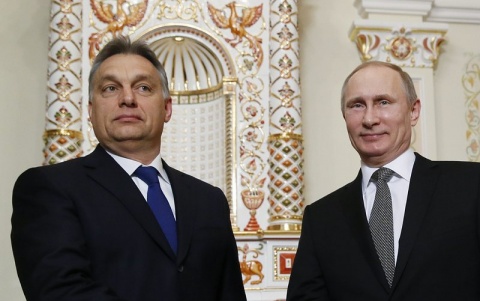 Russian President Vladimir Putin (R) and Hungarian Prime Minister Viktor Orban are pictured during their meeting at the Novo-Ogaryovo state residence outside Moscow. Photo by EPA/BGNES

Hungary agreed a EUR 10 B loan from Russia in a nuclear cooperation deal, signed on Tuesday in Moscow.

The 30-year loan will fund the expansion of Hungary's only nuclear power plant, Paks, where two new blocks will be built, reports Euronews.

"The construction of the new blocks will raise the energy independence of Hungary and will facilitate improvements in questions of energy security", Russian President Vladimir Putin stated, after meeting Hungary's Prime Minister Viktor Orban.

""Russia is our most important partner after the countries of the EU. We appreciate that development", commented Orban.

Hungary is already a part of the Russian Gazprom-led South Stream gas pipeline project, which is set to pass through Bulgaria, Serbia, Hungary, Greece, Slovenia, Austria and Croatia.