Victim of Car Blast in Vienna Had Suffered Gunshots 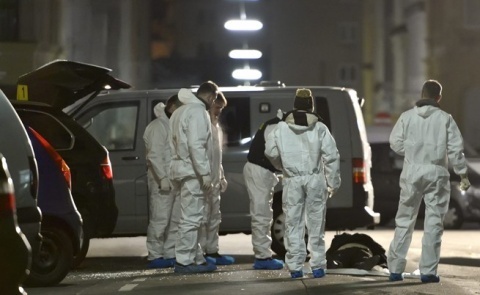 On Saturday, a Bulgarian-registered car exploded at around 3 am in Vienna's Ottakring district. Photo by EPA/BGNES

One of the two men who died in an explosion of a Bulgarian-registered BMW X5 in Vienna had been shot down, according to Vienna police spokesperson Thomas Keiblinger.

Keiblinger presented the results of the autopsy.

At around 3 am on Saturday morning, a Bulgarian-registered car exploded in Vienna's Ottakring district.

A passerby told the police that he had heard shooting and an explosion at a parked SUV.

Until Monday it was believed that the explosion had been an accident.

The autopsy showed, however, that the two men had been victims of a crime.

Keiblinger informed that the investigative forces had ruled out the hypothesis of an accident.

He also said that the Austrian national had received multiple gunshot wounds and had died from them, not from the car explosion caused by the hand grenade.

The dead body of the German national had no gunshot wounds.

The gun with which the Austrian national had been shot down was not discovered in the car or in the vicinity of the blast.

Keiblinger said that the police were working on a scenario involving murder and subsequent suicide, adding that one or more persons could have taken part in the offense.

The Austrian national owned a transport company in Salzburg. A day before the explosion, he asked Bulgarian national Georgi Stankov to give him the BMW as he had to go to Vienna with his friend Waldemar. Stankov gave him the car. He talked with the 45-year-old man on Friday evening, just hours before the deadly blast, and was left with the impression that everything was alright.