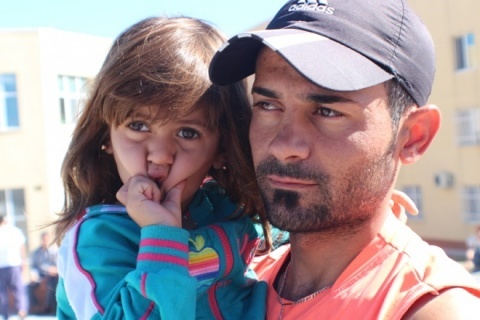 Bulgaria has seen an unprecedented refugee wave over the Syrian conflict. Photo by BGNES

By Cecily Hilleary
Voice of America

WASHINGTON, DC — Bulgaria is facing mounting criticism for its failure to adequately provide shelter, food and medical care to thousands of migrants who have entered the country over the past year, the majority of them Syrian asylum seekers. Aid and humanitarian groups are also worried about rising xenophobia, which, they say, has refugees living in a state of chronic fear. But some analysts say these criticisms aren’t fair and that too much is being expected from one of the poorest countries in the European Union.

Under the 1951 Refugee Convention, Bulgaria is required to take in and protect all asylum seekers. Last year, roughly 11,600 migrants crossed into Bulgaria from Turkey, most of them Syrian. What these refugees found when they got there wasn’t much better than what they left. ­­­­­­­

Boris Cheshirkov, spokesman for the UN Refugee Agency, (UNHCR) in Bulgaria, says up until recently, Bulgaria had only three refugee centers that could accommodate no more than 1,200 refugees. But these centers quickly filled up, and migrants were forced to sleep in hallways, tents and in the streets.  So the government seized several dilapidated public buildings to house the overflow, but these lacked heat and hot water and staffing.
Registered asylum seekers are given no food, but the government does give them an allowance of about USD 1.50 per person per day--enough to buy a liter of milk or a kilo of potatoes.

“Hundreds of people were accommodated in classrooms that were turned into makeshift dormitories,” Cheshirkov said.  “Bathrooms were few, with about 80-100 people sharing a single bathroom. The sewage systems were unable to cope with the sheer numbers of people, and, of course, as they hadn’t been maintained for a number of years, they quickly started to block and back up.”

Human Rights Watch Refugee Program Director Bill Frelick has just returned from Bulgaria where about 10 thousand Syrian refugees were staying at a camp at the Turkish border.

“It is so cold that refugees’ only effort is to make their families survive,” he told VOA Turkish.

The situation first came to public light in October, when Bulgarian National Television used a hidden camera to reveal conditions inside the Voenna Rampa center in the capital, Sofia. Their report got the attention of the European Commission, UNCHR and other humanitarian agencies, who came in November to see for themselves.

“Conditions in the reception centers are deplorable,” the UN High Commissioner for Refugees reported in its January 2 assessment. Amnesty International noted that refugees “are also at risk of arbitrary detention, face lengthy delays in registration and are routinely deprived of access to fair and effective asylum procedures.”

The Bulgarian Helsinki Committee cited “inhuman and degrading treatment and display of white-collar cruelty of the highest order.”

Refugees also face another disturbing trend, says Amnesty International. The mass influx of migrants has triggered a wave of nationalistic fervor goaded by public statements of right-wing leaders and nationalist media outlets.  There have been several attacks on migrants in recent months.

In November, several neo-Nazi factions, including the local branch of the international Blood and Honor Skinhead network, formed the Nationalist Party of Bulgaria, dedicated to cleansing Bulgaria of “foreign and alien immigrant scum.”  The party has organized so-called “civil patrols,” which stop and check foreigners—and a portion of the general population thinks that this is a good idea.

“According to a recent poll, 62% of Bulgarians are not in favor of refugees arriving in the country,” said Barbora ?ernu??kov?, Amnesty’s Bulgaria researcher, “and almost 75-percent of the population say they would not accept refugees in their town or village.”

?ernu??kov? met with officials in November to discuss the problem. “It is extremely important that public figures be careful not to trigger more xenophobia and anti-immigrant attitudes,” ?ernu??kov? said. “The onus is on the authorities to prevent them.”

In October, the government announced plans to build a wire fence along a 30-kilometer stretch of the border with Turkey where, it said, terrain was too rugged to patrol.  The government also stationed an additional 1,160 officers along the border to prevent refugees from entering the country.

“Every country has the right to protect its borders and to adequately police its borders—but that should not amount to pushbacks,” ?ernu??kov? said, “but under international human rights law, any country--including Bulgaria--has to ensure access to territory of all refugees, and anybody should be able to enter Bulgaria and has the right to apply for asylum.”

Last week, Bulgaria announced a delay in completing the fence, which it had hoped to complete by early February.

But some analysts say these criticisms are far too harsh. Bulgaria’s geographic position in southeastern Europe makes it the first stop for Africans, Middle Easterners and others seeking a better life in the West.

Under an EU law known as the “Dublin Regulation,” migrants can only apply for asylum in one country--the first EU country they enter.  But many migrants who apply for asylum in Bulgaria travel onwards to France, Germany or Scandinavia, where jobs and welfare systems are better. “Dublin” permits those countries to deport these individuals back to Bulgaria.

The UNHCR has called on European participants to the Dublin Agreement to temporarily suspend transfers of asylum-seekers back to Bulgaria, saying they risk inhuman or degrading treatment in the country.

UNHCR's Cheshirkov says in recent weeks, the EU has provided €5.6 million (,650,00) to the Bulgarian government so that conditions can be improved, and several member states have made individual donations the help Bulgaria increase its response.

Bulgaria is a poor country.  Corruption, a weak judicial system and organized crime have hindered  its economy, which never quite recovered from the global economic and euro crises.  Average wages are about .75 an hour and salaries stand at about 0 a month, with 12% unemployment.

“The situation is far worse in rural areas,” according to Kristen Ghodsee, Director of Gender and Women's Studies Program at Bowdoin College and an expert in post-communist Bulgaria.

“There are places in Bulgaria—this is an EU state, now—where people live on 0 a month, and they’ve left the market,” Ghodsee said.  “They grow their own food. They have sheep or goats for milk. They cut wood for the winter. They live as if it were the 19th Century.”

So when locals hear that the UNHCR is providing refugees one hot meal a day, says Ghodsee, they are resentful; that’s more than many Bulgarians get to eat.

“It’s not that people think that Syrians are animals or barbarians.  It’s that they are quite frustrated that the EU is treating these Syrian refugees better than ordinary Bulgarians and expecting the Bulgarians to take care of these Syrians, when, in fact, there are more resources available in the Western European countries," Ghodsee said.

HRW's Frelick says Bulgaria is certainly not the only country at fault.

“This is a very serious humanitarian crisis and so far the international community--including the United States--has failed to deal with it properly,” he said.