Thousands of Israelis Pay Respects to Sharon, Funeral Due Monday 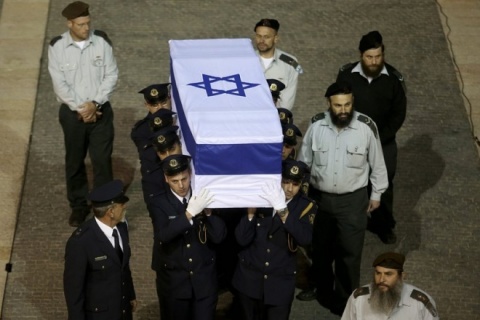 Sharon's body was brought to the Knesset (the Israeli parliament) on Sunday morning and his coffin was then placed on a podium in the plaza outside the building, where it lay in state throughout the day. Photo by EPA/BGNES

Thousands of Israelis have filed past the body of ex-Prime Minister Ariel Sharon, who died on Saturday aged 85 - after eight years in a coma.

Draped in a flag, his coffin lay in state outside the parliament building in Jerusalem.

A state funeral will take place on Monday before a military burial ceremony at his ranch near Sderot.

Sharon's body was brought to the Knesset (the Israeli parliament) on Sunday morning and his coffin was then placed on a podium in the plaza outside the building, where it lay in state throughout the day.

Prayers were said as flags flew at half mast. President Shimon Peres laid a wreath and stood in silence beside the coffin.

A steady stream of thousands of people filed past the podium. Many took pictures while others lit candles in memory of the former leader.

The number of people grew as darkness fell, with some elderly mourners moved to tears.
Ministers held a minute's silence at Sunday's cabinet meeting to remember their former leader. Prime Minister Benjamin Netanyahu told his colleagues that Mr Sharon was "tied to the land and knew that it had to be defended".

A state funeral will be held at the Knesset on Monday, before Sharon's body is taken to his farm, Sycamore ranch, near Sderot in southern Israel where he will be buried in a military ceremony next to his wife Lili, who died in 2000.

Tens of thousands of people are expected to accompany the coffin on his final journey, Israeli army radio reports.

Dignitaries from around the world are thought likely to attend the Knesset memorial service, including US Vice President Joe Biden, Russian Foreign Minister Sergei Lavrov,