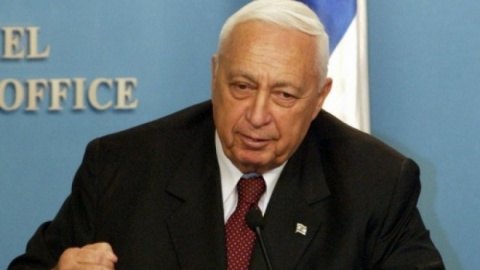 This is the biogrpahy of the former PM as published by biography.com, A+E Networks.

Born on February 27, 1928, in Kfar Malal, Palestine (now Israel), Ariel Sharon was a key player in Israeli military operations for decades, inspiring debate over the ethics of his tactics.

Founder of the Likud Party, Sharon served in Parliament and became minister of defense in 1981, later taking on other posts. He was elected prime minister in 2001 and served until 2006, upon suffering a stroke. After eight years in a coma, Sharon died on January 11, 2014 at the age of 85.

One of Israel's most controversial and charismatic leaders, Ariel Sharon was born in a Jewish settlement within British-controlled Palestine in 1928. His parents had immigrated there from Russia, and he became involved in the Zionist movement at an early age. At age 14, Sharon signed up for the Hagana, a local militia charged with guarding Jewish settlements.

Sharon attended high school in Tel Aviv. In 1948, he distinguished himself during Israel's War of Independence. Sharon led an infantry company and was wounded in the famed battle for Latrun, a fortress on the road to Jerusalem. After the war, he studied at the Hebrew University in Jerusalem.

In 1953, Sharon created and ran an elite military group known as Unit 101. This special branch of the Israel Defense Forces was charged with launching retaliatory strikes against Palestinian terrorists. But it was soon dissolved after the unit staged an attack that resulted in the death of innocent women and children.

During the Arab-Israeli War of 1956, a conflict over the Suez Canal, Sharon commanded a brigade of paratroopers in Sinai. He reportedly got into trouble with his superiors for disregarding orders. The ambitious military leader engaged the Egyptians in battle at the Mitla Pass, resulting in causalities on both sides. Sharon returned to furthering his education after this conflict, eventually earning a law degree.

Over the years, Sharon rose within the ranks, becoming a major general by the time of the Six-Day War, in 1967. As the chief of southern command, he handled the Suez Canal area during the War of Attrition in 1969. Sharon also led the operation to squash the Palestine Liberation Organization in the Gaza Strip in 1971.

Sharon retired from military service in 1973, and began to work on his political aspirations by helping to found the right-wing Likud Party. Shortly after his retirement, however, he returned to the IDF to defend his country during the Yom Kippur War. On this Jewish holiday, Egyptian and Syrian troops attacked Israel from two sides. Sharon oversaw an armored division during this conflict.

As the 1970s progressed, Sharon transformed from a famous military leader to a conservative pro-settlement politician. He started up a program to create Jewish settlements in such contested areas as the Gaza Strip during the administration of Prime Minister Menachem Begin. During this time, Sharon oversaw the development of more than 200 settlements.

In 1981, Begin appointed Sharon to minister of defense.

He renewed diplomatic ties with some African nations that had been cut off nearly a decade earlier, and assisted in the immigration of large numbers of Ethiopian Jews to Israel. In 1982, Sharon launched a controversial and much-contested invasion of Lebanon. The purpose of this attack was drive out PLO leader Yasser Arafat and his forces in the Beirut, but it led to a decades-long military presence in Lebanon by Israeli troops.

To accomplish his end, Sharon allied himself with pro-Christian factions within Lebanon, and supported a new government that was led by Bachir Gemayel. After Gemayel's assassination, a militia of Gemayel's supporters attacked the Palestinian refugee camps of Sabra and Shatila. Sharon had allowed the militia to enter these camps, but he later explained that the militia was supposed to rid them of any remaining terrorists. But, in fact, they went in and indiscriminately killed men, women and children. The Israeli government launched an investigation into the massacres, and found Sharon negligent in how he handled the matter. He was removed from his position in 1983.

While a scandal of that magnitude has destroyed many of a political career, Sharon managed to stay on within the Israeli government. He served as the minister of Industry and Trade from 1984 to 1990. During this time, Sharon was instrumental in signing the 1985 free trade agreement with the United States. He oversaw a tremendous wave of real estate development, as the minister of housing and construction. From 1990 to 1992, Sharon managed the building of 144,000 new apartments, which were created to meet the new needs of the country's growing population. There was a new wave of immigrants coming to Israel from the Soviet Union.

In 1999, Sharon became the chairman of the Likud Party. He made a controversial trip to Jerusalem to visit the Temple Mount, a Jewish holy site that is also home to the al-Aqsa Mosque. This mosque is a revered place for Muslim, and Sharon's presence there in 2000 is considered by some to have helped ignite a new wave of attacks by the Palestinians against the Israelis. In wake of renewed violence, the military hardliner Sharon easily won election as prime minister.

As Israeli's prime minister, Sharon initially seemed to continue his relentless pursuit for security for his country. He launched Operation Defensive Shield in 2002, which was actually a military offensive in several Palestinian areas. Sharon also authorized the construction of protective barriers in certain areas, including the West Bank. As his time in office progressed, he seemed to be shifting away from his militant political position. Sharon began talking about a policy of disengagement with the Palestinians, and seemed to embrace the U.S. "Road Map" for peace between the two sides.

Sharon alienated many of his supporters and his own party members with his call for a withdrawal of Jewish settlers from the Gaza Strip. This was a radical change of heart for the creator of so many Jewish communities built on disputed territory.

Some have speculated that Sharon, a pragmatist at heart, came to realize that holding on to the area had become untenable.

In 2005, Sharon broke with the Likud Party to form a new centrist political group, known as the Kadima Party. He had little time to build this more moderate entity, suffering a mild stroke that December. The following January, Sharon had another stroke, which left him in a coma. Ehud Olmert replaced him as prime minister, as Sharon was declared "permanently incapacitated."

In late 2011, reports surfaced that Sharon had showed some signs of consciousness. His son, Gilad, told the press that his father could move his fingers when asked and make eye contact with visitors. Gilad recently wrote a book about his father, entitled Sharon: The Life of a Leader. Sharon's other son, Omri, has followed in his footsteps, serving in the Knesset, the Israeli parliament. Their mother, Lili, Sharon's second wife, died in 2000.

On January 11, 2014, after spending eight years in a coma, Sharon died at the age of 85. With his brash and sometimes ruthless military and political maneuvers, Sharon inspired intense reactions from his fellow countrymen and the world at large. His legacy is likely to be viewed in opposing terms—a military tyrant and a tireless defender of Israel. As journalist Ilene R. Prusher wrote in The Christian Science Monitor, "There is one thing that Sharon's fans and foes can agree on: the man's nearly unstoppable determination to do whatever he deemed best for the sake of Israel's security."