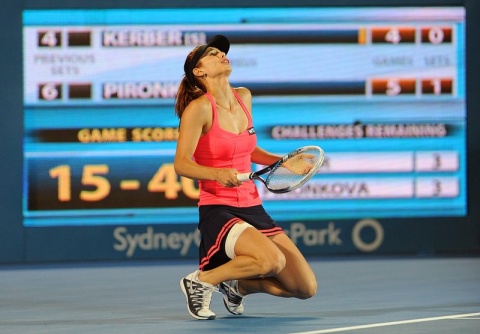 Bulgaria's Tsvetana Pironkova as she won the matchpoint of the Sydney International final. Photo by EPA/BGNES

Bulgarian Tsvetana Pironkova won her first WTA in Sydney against German Angelique Kerber in a game that was a display of stunning athletic prowess.

Pironkova, who is ranked 107th and was a qualfier for the tournament, beat 9th ranked German Angelique Kerber, who was seeded 5th.

Below follows an excerpt of the official report of the APIA Sydney International final Friday. You can read the full report HERE.

Kerber is noted for her fitness and fighting abilities, and ensured the crowd were treated to some fabulous all-court rallies. Both players’ shot-making and athleticism were at times spell-binding, and the quality of the tennis was reflected in the two women combining for more winners than errors. Pironkova’s serving was of particular note, the slight Bulgarian drawing impressed murmurs from the crowd when she cracked it at speeds exceeding 185 km/h.

Despite the straight-set scoreline, many of the games featured torrid battles at deuce, none more memorable than the second game of the second set, which extended for 13 minutes and 11 deuces before Kerber finally held. Raising her hand in triumph, it appeared the German had wrested control of the momentum after dropping the highly competitive opening set.

But Pironkova steadied, hitting her way out of another tense spot in the third game and then breaking serve for a 3-1 lead after Kerber hooked a running forehand wide.

Kerber showed her mettle to win the next three straight games, benefitting from some loose play from the Bulgarian. But again, the shift in momentum didn’t stick. Committing to her shots, Pironkova forced a pair of errors from Kerber’s racquet, and later smited a backhand return winner to level at 4-4.

The crowd were noticeably in the underdog’s corner, as the Bulgarian flags dotted around the arena attested.

And she gave them more to cheer when she let fly with a flurry of winners in the ninth game, producing lob, forehand and backhand winners on her way to holding for a 5-4 lead.

This burst was a blow to Kerber, whose game disintergrated into errors when she came out from the change-of-ends, serving to stay in the contest. She pushed a forehand wide to bring up two match points for the Bulgarian, and again erred after a short rally to hand the qualifier a famous victory.

Pironkova sunk to her knees and was overcome by emotion, dedicating the win to her grandfather who had passed away.