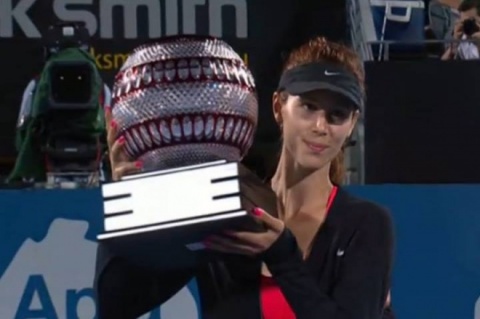 "Mom, Dad, we got a trophy," were the words with which Bulgaria's best female player Tsvetana Pironkova begun her emotional speech after winning the first title of her career.

On Friday, Pironkova won her first ever WTA title, beating Angelique Kerber 6:4, 6:4 at the Apia International in Sydney.

She thanked all who stood by her and supported her and her sponsors that made the event possible.

"This was the best thing for me so far," continued Tsvetana in Sydney, while her parents watched with teary eyes.

"Everyone here, thank you very much once again - my family back home, my boyfriend, I love you," she added.

"Last but not least, I want to dedicate this title to a person who is no longer with us - my grandfather Nikola. I know that you are here tonight, thank you," Pironkova concluded without holding back tears.