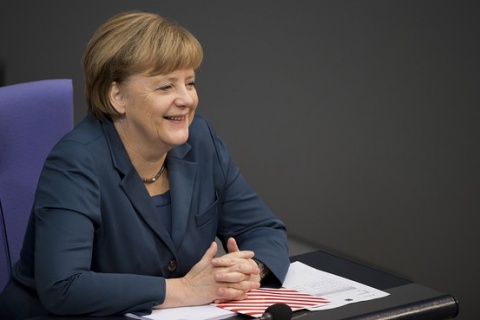 German Chancellor Angela Merkel arrived for a session of the Bundestag lower house of parliament in Berlin Nov. 28, 2013. Photo by Getty Images

Chancellor Angela Merkel is trying to calm a growing rift in her new government over immigration to Germany from poor Eastern European countries, an increasingly contentious issue in much of Europe's richer west.

Ms. Merkel's cabinet Wednesday decided to set up a committee to examine legal safeguards against so-called benefit tourism, or exploitation of the German welfare system by immigrants.
The issue has jumped to the fore recently in part because the European Union on Jan. 1 lifted restrictions on the freedom of movement around the bloc of people from Romania and Bulgaria—two of its newest and poorest members.

The announcement by the chancellor, who is working mostly from home after she fractured her pelvis while cross-country skiing over Christmas, was an attempt to take the sting out of a simmering fight between her coalition partners.

But the left-leaning Social Democrats, who are also in Ms. Merkel's new government, say the Bavarian party is exaggerating the problem and pandering to anti-immigrant sentiments.

The Christian Social Union called late Tuesday for tougher action to prevent possible benefit fraud, and demanded that EU citizens who cheat the benefit system should be expelled from Germany and banned from returning.

"Anyone who cheats must go," the party said in a paper adopted at a meeting of its national lawmakers. "We support free movement in the EU. But we reject immigration into our social-security systems."

Such proposals are legally and politically contentious in Europe because EU treaties guarantee free movement across the continent for all citizens of the 28-country bloc.

Romanian and Bulgarian officials have also taken umbrage at the way some West European politicians have cast their citizens as a menacing horde of potential benefit cheats.

The Bavarian party this week also demanded that EU migrants to Germany get no unemployment or other benefits until they have been resident for at least three months.

The U.K. recently passed legislation that would similarly disqualify EU migrants from claiming jobless benefits for the first three months, and that allows the deportation of EU migrants who beg or are homeless.

Immigration from countries both inside and outside the bloc is expected to be a major issue in many countries in the run-up to elections for the European Parliament in May.

In Germany, the Christian Social Union is the first major party to play up the issue, although far-right fringe parties have long sought to cash in on it, so far with little success.

The Social Democrats retorted this week that German benefit rules for migrants are already strict and that free movement for workers is a historic achievement of European integration.

If there is a problem, it is that immigration is straining the finances of local authorities, which need more money from the central government, the German Labor Minister Andrea Nahles, a Social Democrat, said Tuesday.

The German Institute for Employment Research, or IAB, a government-funded think tank, estimates that between 100,000 and 180,000 Romanians and Bulgarians might move to Germany this year, compared with a net inflow of about 70,000 in 2013.

The Labor Ministry says Germany's labor market is strong enough to absorb the new arrivals, and points to the successful integration of numerous Poles, Czechs and other Central Europeans since they gained full free-movement rights across the EU in 2011.

Still, pockets of social problems exist in poorer German cities such as Dortmund and Berlin, where many Eastern Europeans are unemployed or work for such low pay that they need welfare benefits to survive, according to the IAB.

"We must create an awareness that immigration is in Germany's interest," Martin Wansleben, head of the German Chambers of Industry and Commerce, said recently.

Without further immigration, German companies could face a severe shortfall of workers by the mid-2020s, he said.