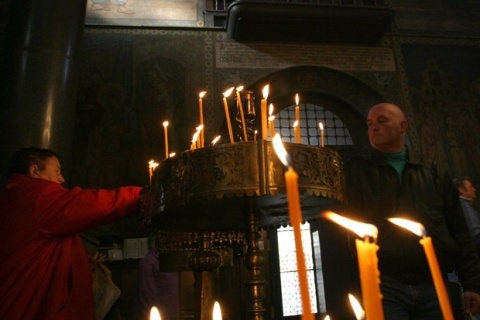 The Bulgarian Orthodox Church honors on January 7 Saint John the Baptist, with the celebration commonly known as the Day of Ivan. Photo by Sofia Photo Agency

The Bulgarian Orthodox Church honors on January 7 Saint John the Baptist, with the celebration commonly known as the Day of Ivan.

John the Baptist was a mission preacher and a major religious figure who led a movement of baptism at the Jordan River in expectation of a divine apocalypse that would restore occupied Israel. John followed the example of previous Hebrew prophets, living austerely, challenging sinful rulers, calling for repentance, and promising God's justice.

Most notably John is the one who recognized Jesus as the Messiah, and on Jesus' request, baptized him. The baptism marked the beginning of Jesus' ministry.

The Eastern Orthodox believe that John was the last of the Old Testament prophets, thus serving as a bridge between that period of revelation and the New Covenant. They also teach that, following his death, John descended into Hades and there once more preached that Jesus the Messiah was coming, so he was the Forerunner of Christ in death as he had been in life.

According to Sacred Tradition, John the Baptist appears at the time of death to those who have not heard the Gospel of Christ, and preaches the Good News to them, that all may have the opportunity to be saved. Orthodox churches will often have an icon of Saint John the Baptist in a place of honor on the iconostasis, and he is frequently mentioned during the Divine Services. Every Tuesday throughout the year is dedicated to his memory.

January 7 is also the name day of Ivan for the males and Ivanka for the females and for all derivatives of the name.

The ritual bathing for health, typical for Epiphany, continues on the Day of Ivan, even more so in some regions of the country. Everywhere, the rite is for the newlyweds and the rite of bathing the groom is often done by the best man. Maidens, young men and people named Ivan or Ivanka, and, in Southwestern Bulgaria, new brides and baby girls, also bathe for health on January 7

The rite bathing includes exchange of gifts. One this day people also visit their best man and his wife due to the popular belief that Saint John the Baptist has been their patron. The best man receives a bun, meat and wine.