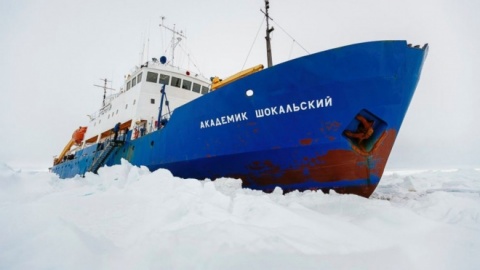 The Akademik Shokalskiy ship has been stranded in Antarctic ice since Christmas Eve. Photo by EPA/BGNES

A US icebreaker is the latest vessel to attempt to rescue a Russian vessel trapped in heavy Antarctic ice and a Chinese ship which went to its aid.

The Russian research ship Akademik Shokalskiy was blocked by ice on December 24. The passengers were rescued in a helicopter operation, which was launched after two attempts of approach by icebreakers failed due to poor weather.

During a rescue attempt, the Chinese icebreaker Snow Dragon (Xue Long) found itself stuck as well.

The scientists from several different nationalities were taking part in an expedition to commemorate the 100th anniversary of an Antarctic journey by Australian explorer Douglas Mawson.

ABC now reports that he Australian Maritime Safety Authority (AMSA) and the Chinese and Russian governments have requested the help of the US Coast Guard, which has agreed to make one of its largest ships, the Polar Star, available for the rescue mission.

The powerful US icebreaker has been en route to Antarctica since December 3 on a mission to clear a shipping channel for re-supply ships.

US Coast Guard Pacific area commander Vice Admiral Paul Zukunft is quoted in saying the vessel will cut short its planned visit to Sydney and leave today for the seven-day voyage to Commonwealth Bay.

The Polar Star has a crew of 140 people, a reinforced hull and a special bow which is specifically designed for open-water icebreaking.