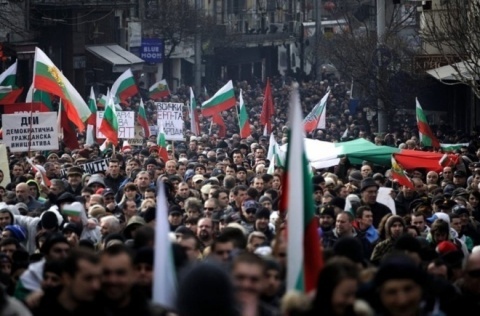 File photo of the summer 2013 protests in Sofia.

Bulgarian citizens have called a protest rally against the cabinet of PM Plamen Oresharski for 6 pm Friday in capital Sofia.

This is the first protest for 2014 of a string of rallies that started on June 14 after the appointment of a controversial media mogul for head of Bulgaria's national security agency.

Although the appointment was swiftly retracted, protests lingered and grew, calling for an end to the alleged influence of mafia on Bulgarian politics, and the resignation of the new Oresharski cabinet.

Protests dwindled over the summer and fall, but gained new strength with the October-November 2013 occupation of Sofia University.

Friday Bulgarians working abroad are calling all fellow citizens to join them in the rally, which will assemble in front of the Bulgarian National Bank in downtown Sofia.

Dubbed "Second protest before leaving," the rally once more will call for resignation and for immediate further steps to heal Bulgarian politics.

A protest rally was to be held amid New Year's festivities on Sofia's Alexander Batenberg Sq. the night of December 31/ January 1, but no significant anti-government gathering took place.

Protesters have vowed to get "more radical" in the beginning of January.