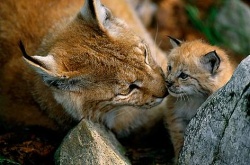 Lynxes have been captured on photo in Bulgarian wild areas over the past year, revealed a WWF Bulgaria representative.

According to Elena Gancheva, who coordinates the WWF "Adopt a Lynx" campaign, two male and one female lynxes have been photographed using so-called photo traps in Bulgaria's western Osogovo mountain at the border with Macedonia.

"For long, the lynx was believed to be extinct from Bulgarian lands but now we have cetain evidence that it is coming back," said Gancheva for Bulgaria's Focus Information Agency.

The extinction of the wild cat was caused by overhunting, with the last lynx in Bulgaria registered in 1947, when it was killed.

"It is yet early to be speaking about a lynx population in Bulgaria, especially about a permanent one," said the WWF representative.

According to the environmental organization, the animals who have been documented have most probably entered Bulgaria from neighboring Macedonia and Serbia.

"The lynx needs a very large territory. In one day, an animal of the species can range some 30 km searching for food," said Gancheva.

She added that the species relies on tranquillity and the absence of intensive human presence in the area it inhabits.

According to Gancheva the WWF "Adopt an Animal" campaign, which allows people to donate for bettering habitats for several species, including the lynx, has raised significant awareness among Bulgarians.