All Injured in Volgograd Terror in Stable Condition 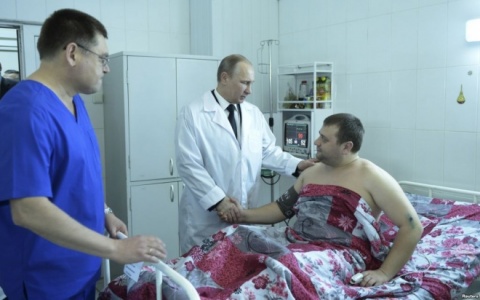 The President of the Russian Federation, Vladimir Putin, visited Volgograd on Wednesday, the first day of 2014, to meet with victims of the recent terrorist attacks there. Photo by www.voanews.com

The condition of all of the injured in the two terror attacks in the Russian city of Volgograd is reported as stable.

The days of mourning in Volgograd Region, following the terrorist acts there, continue in the second day of the new year.

According to the Ministry of Health of Russia, 46 people, injured in the explosions of December 29 and 30, are currently hospitalized in the southern Russian city. Another 18 people were flown for treatment to the capital Moscow.

Doctors in Volgograd prepare the transportation of another 15 patients to the capital, Bulgaria's bTV reported Thursday.

The Volgograd Region authorities have already paid compensations of 2 million rubles to 28 injured and six families of people killed in the terrorist acts.

The President of the Russian Federation, Vladimir Putin, visited Volgograd on Wednesday, the first day of 2014, to meet with victims of the attacks. The investigation in the explosions is ongoing, and Putin vowed to destroy the terrorists until the very end.

The number of people killed in an explosion at the city's rail station stands at 18; for the blast on a trolleybus Monday, the toll has reached 16.

The two attacks left over a hundred injured, including 65 people hospitalized. All victims have been identified.

No one has yet claimed responsibility for the two latest explosions.

Russian media reported meanwhile that according to preliminary information the suicide bomber was a Russian male, Pavel Pechenkin, who converted to Islam in 2012.