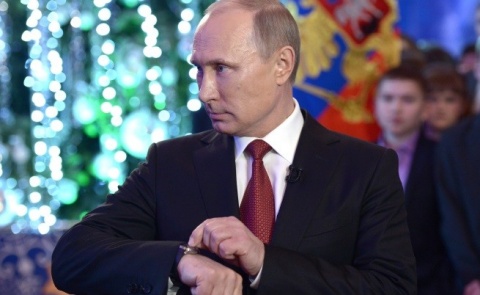 The first pre-recorded New Year's address, which was heard by the residents of Kamchatka, Chukotka and Magadan region, made no mention of the Volgograd terror attacks from the past two days. In this speech, Putin outlined the priorities for the coming year, according to RIA Novosti.

In the second speech, which was recorded in Khabarovsk and was aired an hour after the first one, Putin referred to the bombings in the southern city of Volgograd as one of the most serious challenges which the country had faced in 2013.

He vowed that the authorities would fight the terrorists until their total annihilation.

In Volgograd, at least 34 were killed and scores of people were injured after attacks by suicide bombers on a railway station and a trolleybus on Sunday and Monday. The blasts, which took place in less than 24 hours, heightened security concerns for the upcoming Sochi Winter Olympics.

Putin's Spokesman Dmitry Peskov explained the two speeches with technical imperfections, saying that the authorities had not managed to send the second speech to the Russian Far East, according to dnevnik.bg.

During his visit to Khabarovsk, a city hit by devastating floods in late August and early September, Putin met with people affected by the natural disaster, stressing that all funds for repairs had been disbursed by Moscow and had been received by the regional authorities.