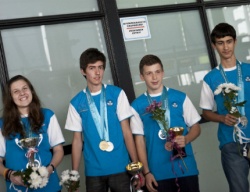 A team of students from the Sofia High School of Mathematics won medals at the 2013 Asian Inter-Cities Teenagers' Mathematics Olympiad held in Bogor, Indonesia.

Hristo Popov, Maria Delyakova, Viktor Kostov and Manol Dzhambazov returned to Bulgaria after an excellent performance at the mathematical Olympiad in Indonesia.

The youths competed with 32 teams from 10 countries, according to reports of the Bulgarian National Radio (BNR).

The Olympiad, hosted by Indonesia's Ministry of Education, was held on December 26-30 and the event brought together 128 math wizards from countries such as Taiwan, China, India, Malaysia, the Philippines, Iran, Kazakhstan, Indonesia, etc.