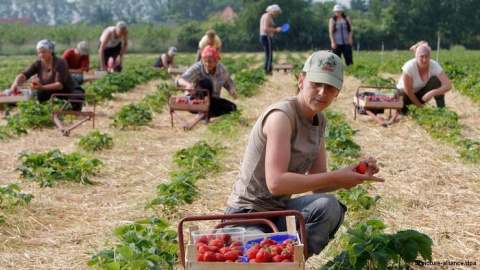 As of January 2014, restrictions are lifted on Romanians and Bulgarians seeking long-term work in other EU member states. But experts say expectations of massive immigration from the two countries are likely unfounded. Photo by Deutsche Welle

The overwhelming majority of Britons are ready to welcome migrants from Bulgaria and Romania, if they integrate and work hard, a new poll suggests ahead of restrictions on them being lifted.

The Ipsos Mori poll for the thinktank British Future shows 72% of people aged 35-44 support rights of east European workers to live and work in UK.

As many as 68% of those asked said they would be happy for migrants to come on those terms. That sentiment was particularly strong among people aged between 35 and 44, with 72% supporting their right to come to live and work in the UK.

The new poll finds that only one in four Britons (24%) believe that restricting the free movement of people, while staying in the EU, should be one of the government's priorities. A similar proportion (26%) said leaving the EU should be a priority if it does not change its rules on allowing people to come to the UK.

Nearly half (45%) said that enforcing the minimum wage was one of the most important ways of stopping business undercutting British workers by paying European workers less. Around one in five (22%) believed in the importance of managing the impact of immigration by, for example, giving more support to areas heavily affected.

The polling also showed that, while a significant majority did want a tightening of the welfare system (63%), just 2% of those asked believed that there was nothing migrants from Romania and Bulgaria could do to be accepted.

This compares with 69% who said that learning the English language should be a priority for migrants, and 64% who said getting a job and paying taxes were among the key things to do.

Sunder Katwala, director of British Future, said: "I think the findings show that Romanian and Bulgarian migrants coming to work and play by the rules are welcomed; that coming to work, and not claiming before they've paid in, seems more important to people than rewriting the free movement rules or getting out of Europe, though both are legitimate long-term debates."