Bulgaria's Travails Should Be A Sobering Reminder to Ukrainians: The EU Doesn't Fix Everything 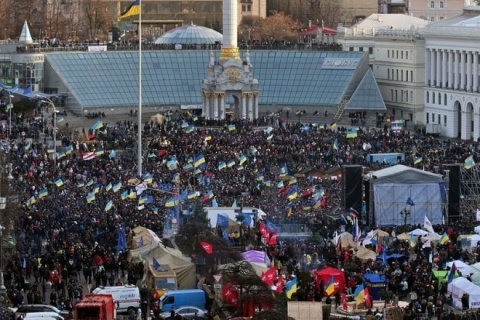 The Ukriane's government's decision not to sign a deal on closer EU ties last month has sparked weeks of mass rallies in the capital Kiev. Photo EPA/BGNES

At a time that thousands of Ukrainians continue to protest in favor of integration with the European Union, it's worth taking a moment to consider whether or not the EU is actually capable of delivering on the protesters' expectations. I've repeatedly argued that if Ukraine's citizens want to be in Europe then they should be in Europe and that Russia should not get a de-facto "veto" over Kiev's decision making. But it seems to me that the rhetoric surrounding EU integration ("civilizational choice" and other such phrases) has ascended to a level that is decidedly unhelpful for rational decision making. When tens of thousands of people are willing to camp out in the freezing cold and to face police truncheons, I think it's safe to say that they have pretty high expectations of what their preferred policies can achieve.

Bulgaria, widely acknowledged to be the EU's poorest and most corrupt member, offers an instructive example of what Ukraine can realistically expect should it ever succeed in fully politically and economically integrating with Europe.* Without being too insensitive, Bulgaria is a real mess at the moment. Last winter there were violent clashes in front of parliament in which dozens were injured and in which two protesters actually set themselves on fire. The mood of popular discontent was vital in forcing out the old government, but the new one, a fragile coalition led by the socialists, beceme embroiled in a major political scandal almost immediately after it took office. Over the course of 2013 protesters continued to express outrage at perceived corruption and moral rot and seemed unsatisfied with the halting progress in meeting their demands. It's anyone's guess when (or if) Bulgaria's extended state of political crisis will come to an end.

Violent xenophobia and extremism are on the rise throughout society. Extremist attacks have become a depressingly common occurrence, and areoften directed against a recent influx of Syrian refugees who are resented for being drains on the public purse. While violence in such situations is never excusable, you really can't blame Bulgarians for not being in a particularly charitable mood: according to the European Commission 85 % of all household monthly income is spent on basic necessities and 44%(!) of all Bulgarians experienced "severe material deprivation" in 2011.

Unfortunately, the economic front seems unlikely to improve any time soon:2013 GDP growth is expected to be 0.5% (well less than half the rate of "stagnant" Russia) while 2014 and 2015 are forecast at 1.5% and 1.8% respectively. Unemployment, at 13.2% in October 2013, is not only frighteningly high but has actually been on an upward trajectory for the past few yeears (the rate was less than 10% as the financial crisis ended).

So, in Bulgaria, you have an EU member in which poverty is extremely widespread, the labor market is in shambles, violent xenophobia is growing, and public disillusionment and disgust with the corruption of politics and public life is ever more prevalent.

It is obviously the case that Bulgaria's integration with the EU did not cause its political, social, and economic problems. Those problems have roots in the country's history and, in particular, the baleful influence of decades of communist dictatorship and command economics. Bulgaria could have eschewed Europe entirely, and it would still have had enormous difficulty in creating democratic and free market institutions. When asked, Bulgarians generally agree that the EU has been a positive overall influence and I see no reason to disagree with them.

But, as should be clear from recent reportage out of the country, "Europe" has done exceedingly little to bring concrete solutions to Bulgaria's many problems. Brussels can help nudge a country in the right direction and can provide valuable technical assistance and expertise, but the real impetus for reform ultimately has to be domestic in nature. In the absence of broadly shared goals among the public and the political elite the EU simply lacks the ability to force change.

Does this mean Ukraine is inevitably fated to become a larger version of Bulgaria? No. It's a different country with different traditions, different institutions, and different interest groups. But considering Ukraine's stark political divisions between East and West, its history of high-level corruption, its parlous economic condition, and the lack of any real elite consensus on what the country should be and where it should be moving, it's not particularly hard to imagine a situation in which the country moves ever-closer to the EU but its multitudinous problems endure. The fights against corruption and for accountability are important but are also really, really difficult. By necessity,  these struggles must be primarily domestic and Brussels can only ever be a bit player in their resolution.

It's important to keep Bulgaria's experience in mind not because it proves that the EU is bad, but because it reminds us of what "Europe" is actually able to achieve in societies with deeply rooted economic and political problems. These achievements are real, but they are absolutely not the clean, tidy break with the past that many in Kiev seem to be demanding.