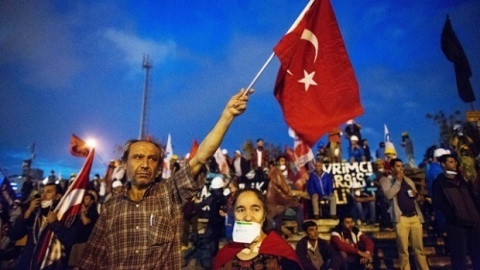 Hundreds of people across Turkey walked out on the streets, calling for the resignation of PM Recep Tayyip Erdogan in the midst of a high-profile corruption scandal that shook cabinet.

In a controversial move, Turkish prosecutor Muammer Akkas was removed from the high-level graft case, which has led to the arrests of the sons of two of Erdogan’s government ministers.

Akkas accused the police of obstructing the investigation, saying: "by means of the police force, the judiciary was subjected to open pressure and the execution of court orders was obstructed."

However, Chief Prosecutor Turhan Colakkadi told reporters that Akkas had been removed from the case for leaking information to the media and failing to provide timely progress updates.

"Nothing can be covered up. Regardless of who the criminals are, or whose children are involved, we will not allow for the judiciary to be eroded," Colakkadi said.

PM Erdogan has repeatedly said he believes he is the real target of the probe, behind which he sees a scenario for the overthrow of power in Turkey.

There are Turkish media reports that the corruption investigation could be set to reach members of Erdogan's own family.

On his part, opposition CHP party leader Kemal Kilicdaroglu has commented that he sees the influence of the so-called "Deep State" behind the cabinet reshuffle, refering to the perceived interplay of special services, organized crime and political elites in Turkey.

Starting in May 2013, Turkey has been shaken by the vastest anti-cabinet protests for decades.

In what started as the Occupy Gezi movement, thousands walked out in the streets of major Turkish cities, clashing with riot police, to protest against what they see as an anti-secular and anti-democratic direction that the longtime PM is taking the country.