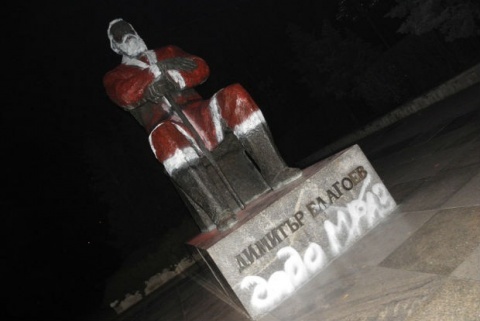 The three people detained for painting a monument of Bulgarian social democrat movement founder Dimitar Blagoev have been released from arrest, with one of them to face court.

The 3 were arrested Wednesday, after CCTV identified them as the ones who sprayed the Blagoev monument in southwestern Bulgarian city Blagoevgrad - named after the activist - painting the figure in 'Santa Claus' attire.

Two of the detainees were released soon after, but one of them, Kaloyan Handzhiyski, was held for 24 hours, and will face charges of petty breaking of public order on Monday.

The reason for his longer detention and charges against him is that footage showed it was he who carried the equipment used in the deed.

Wednesday it was revealed that Handzhiyski is local organization head for minor but important Bulgarian party Democrats for Strong Bulgaria.

Dimitar Blagoev (1856-1924) is known as the founder of the first social democratic party in Bulgaria, from which the present Bulgarian Socialist Party - currently in rule - traces its origin.

This is the latest in a spate of "painting" incidents in which rightist activists have defaced monuments relating to the history of socialism in Bulgaria, including the Soviet Army Monument in Sofia and an anti-fascist resistance monument in front of the Socialist Party headquarters.