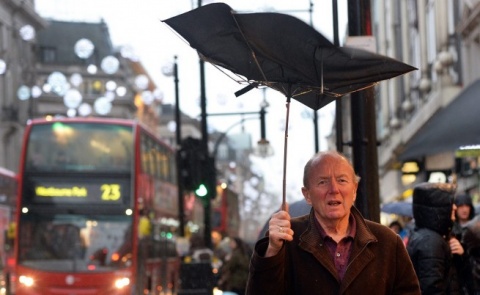 The storm caused five deaths in Britain, three of whom died in traffic accidents and two drowned, according to reports of ITAR-TASS.

In Ireland, the storm claimed the life of a young woman, as a tree fell on her car amid winds of up to 150kph.

Flood warnings have been issued for 300 regions in the United Kingdom.

The country is bracing for winds of over 80 kph Thursday night through Friday, with Ireland, Northern Ireland, Wales, southwestern Scotland and the western coast of England expecting gusts ranging from 95 to 130 kph.

The country has been gripped by a storm for three days, with over 300 000 households experiencing power supply disruptions, according to international news agencies, as cited by the Bulgarian Telegraph Agency.

On Wednesday, 100 000 homes across the UK suffered power outages.

Thousands of passengers were stranded at London Gatwick Airport on Wednesday after a total of 105 flights to and from the airport were cancelled.

A 12-year-old boy died in Normandy on Monday after a wall collapsed on him.

Snow and rain in Norway, Sweden and Finland caused the authorities to advise the people against travelling.

The storm is expected to extend its grip on Italy.