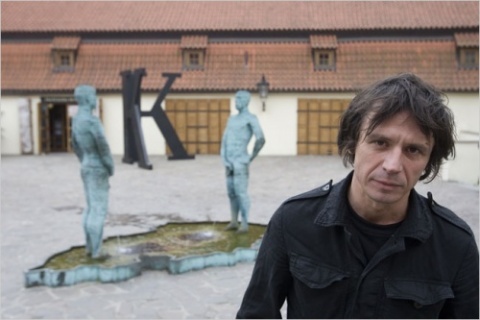 David Cerny in front of one of his sculptures. Photo by The New York Times

The following article was published at Novinite.com on November 7, 2013, turning into one of the news pieces with most likes on Facebook.

Unbelievable and alarming that those guys are under arrest," famous Czech artist David Cerny told Novinite.com on November 7 in connection with the detention of activists who painted a memorial in front of the Socialist Party headquarters in Sofia.

"Is Bulgaria really in the EU?" says the artist, known for his bold street installations.
Novinite.com contacted Cerny for comment as friends and supporters of the Sofia activists explained on Facebook that the memorial was painted in purple (not blue as reported earlier) and pink in a tribute to two of the most popular installations of the artist.

The first one is a very recent huge purple statue of an extended middle finger, which he floated down the River Vltava in Prague, just days before the general elections in the country. The finger was pointed at Prague Castle, the seat of President Milos Zeman, in opposition to the latter's plan to have the left-wing Social Democrats form a minority government with the tacit support of the Czech communists.

The second is a tribute to Cerny painting pink a Soviet tank in Prague, mounting an erected middle finger on top, in the now distant 1991.

It was reported early Thursday morning that Asen Genov, a Bulgarian activist and widely-read blogger, has been arrested as he and a group of artists tried to paint the memorial.

Another five people have also been arrested and taken to a police unit in Sofia shortly after 5am.

Asen Genov has been one of the most active participants in the anti-government demonstrations in Bulgaria and the "protest network" association that they established.
The association brings together the administrators and members of some of the leading anti-government groups on social media and aims to act as an "instrument for cooperation and contact" open to all.

The memorial depicts Bulgarian communist and pro-Soviet guerilla partisans, who in the period 1941 -1944 led clandestine and armed battles against the official government. It was also reported that the date for the painting, the morning of November 7, was chosen on purpose as it is the day marking the Great October Socialist Revolution commonly referred to as Red October, which was the Bolshevik seizure of state power in Russia. During the Communist regime November 7 was an official holiday in Bulgaria.

As information emerged that the activists have been arrested for hooliganism and vandalism, their supporters insist this was pure political protest.

The series of anti-government rallies in Bulgaria started on June 14 in response to the election of controversial media tycoon Delyan Peevski as head of the State Agency for National Security (DANS).

Although the appointment was cancelled, the move did not appease public discontent and the protesters went on to demand the resignation of the socialist-led government of Prime Minister Plamen Oresharski over ties with oligarchs, as well as early elections.

In addition to the painting, the activists inscribed on the memorial "Bulgarian Communist Party (BKP) – Shame!" and the question "Who?" which became popular during antigovernment protests and refers to the still unanswered question "Who suggested Peevski for the post?"

As recently as August 21, the controversial monument of the Soviet Army in the downtown of the Bulgarian capital Sofia was colored in honor of the Prague Spring.