Bulgaria's President, PM Side by Side at Top Christmas Charity Event 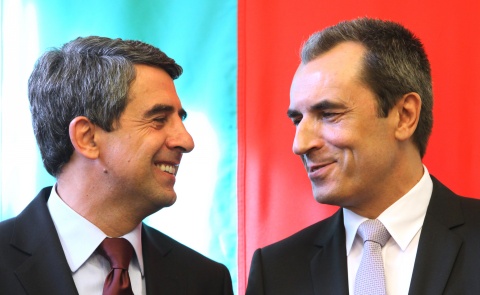 Bulgaria's President Rosen Plevneliev (L), known for his support for the anti-government protests, will be joined at the charity event by the head of the Socialist cabinet Plamen Oresharski (R). Photo by Sofia Photo Agency

Bulgaria's president and prime minister will turn their backs on political differences and stand side by side at the major and much cherished charity initiative "The Bulgarian Christmas".

Bulgarian President Rosen Plevneliev announced on December 2 the official launch of the 11th edition of the 'Bulgarian Christmas' charity initiative.

Like in previous years, a Christmas concert on December 25 will mark the culmination of the initiative, where Plevneliev, known for his support for the anti-government protests, will be joined by the head of the Socialist cabinet Plamen Oresharski.

Phone lines will be left open until New Year's Eve. Those, who want to donate, may transfer money to the bank accounts of the initiative by the end of January.

''Bulgarian Christmas' campaign 2013-2014 is oriented toward young children with visual and hearing impairments.

"Children do not realize what good vision and hearing means, thus they rarely complain. Their impairments become clear only when they start going to school. However, without a timely care, the disability can be fatal and remain for life, said the patron of the charity campaign, Bulgarian President Rosen Plevneliev, as he launched it.

"Unfortunately, Bulgarian country lacks medical devices for screening, early diagnosis and timely treatment. Sadly, some children are at high risk of losing their sight and hearing at a very early age. We, as their parents and their doctors, face the challenge and responsibility to control this risk," Plevneliev added at the opening of this year's initiative.

The finalized earlier edition of the 'Bulgarian Christmas' campaign for 2012-2013 was focused on the rehabilitation of children with neurological disorders, President Plevneliev recalled.

The 'Bulgarian Christmas' initiative was launched by former President Georgi Parvanov in 2002 with the aim to raise money for the treatment of seriously ill Bulgarian children and to buy medical equipment for children's hospitals and clinics.

President Plevneliev has vowed to keep alive the initiative, which Parvanov has described as one of the biggest achievements he left to his successor.