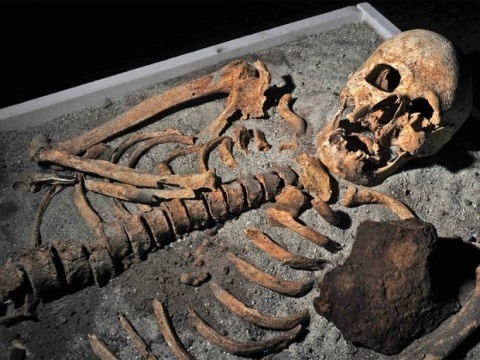 The skeleton of a man at Sozopol in Bulgaria, with an iron stake driven through his chest. Photo by Getty Images

Two towns in Bulgaria and Romania are planning to boost their tourist appeal by capitalising on their "vampire" past, it seems.

Bulgaria's ancient city of Sozopol on the Black Sea coast is teaming up with medieval Sighisoara in Romania, the birthplace of Vlad the Impaler, the ruler thought to have inspired Bram Stoker's Dracula.

Last year, archaeologists in Sozopol found the 700-year-old skeleton of a man with an iron spike through his chest. The old pagan ritual was meant to prevent "bad" dead people from rising from their graves.

Sozopol's mayor, Panayot Reyzi, saw an opportunity to attract more tourists by twinning his city with Sighisoara. "Both Dracula and our vampire had a limp and could've been cousins," he tells the Flagman news website.

Recently he announced the two towns had agreed to create a "vampire trail". Tourists visiting Dracula's house in Sighisoara would also be encouraged to go to neighbouring Bulgaria to see the "Sozopol vampire", explains Focus News.

The number of visitors to the archaeological museum in Sozopol has quadrupled since it exhibited the pierced skeleton this summer, Burgas 24 news website reports.

However, with the "vampire trail" stretching to nearly 700 km, it would take a long day to bus tourists from one attraction to the other.