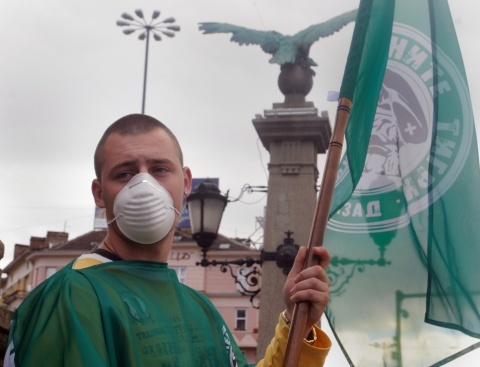 A file photo shows a member of Bulgaria's youth eco association "Green Tigers" rallying in a protest action against the air pollution in the capital city of Sofia. Photo by Sofia Photo Agency

An abnormally high concentration of dust particles in the air was measured Wednesday in 14 cities in Bulgaria, the country's executive environmental agency has alarmed.

The levels of dust particles exceeded the average daily rate by 1.02-3.78 times. The highest concentration of dust was reported in the capital city of Sofia.

The international ecological organization Greenpeace has released a report earlier in 2013, according to which the highest air pollution with sulfur dioxide and fine dust particles per produced kWh of electricity in Europe has been registered in Bulgaria.

According to the report, over 2 000 people in Bulgaria die prematurely due to air pollution from Thermal Power Plants (TPPs). The number of victims of TPP coal burning exceeds four times the number of traffic fatalities in the country. Over 3 000 adults and 2 600 children suffer from respiratory diseases, and another 3 700 experience reduced job performance.