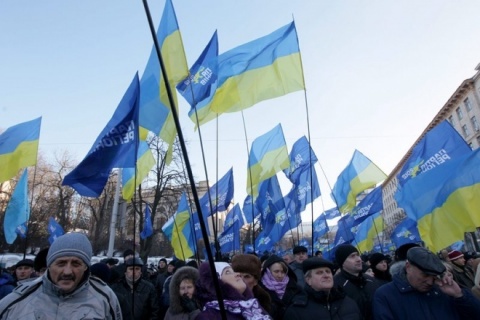 The Ukrainian capital Kiev is bracing for a new wave of antigovernment rallies with up to one million expected to attend.

The rally is starting at 12:00 pm local time Sunday.

Thousands of pro-EU protesters remained overnight in Independence Square in downtown Kiev. Barricades around the protesters' stronghold have been reinforced with old tires and metal pipes packed with ice and snow following an attempt by special police Berkut to dismantle them earlier this week.

Pro- and antigovernment groups held demonstrations close to each other on Saturday. There were no reports of violence.

The opposition accuses the authorities of bussing people into Kiev for the pro-government rally and providing them with money and food.

The authorities officially deny this, but a number of participants in the rally have said they were forced to take part, the BBC reported.

Protests began in November after Ukrainian President Viktor Yanukovych made a last-minute U-turn on a landmark deal with the EU.

Yanukovych has said he fears the association agreement will put at risk many enterprises dependent on trade with Russia.

The president - who claimss he eventually will sign the deal - has also admitted being under heavy pressure from Moscow, which wants Kiev to join a Russian-led customs union instead.

In other developments, Yanukovych suspended Saturday his deputy security chief, Volodymyr Syvkovych, and Kiev's mayor, Olexander Popov, over the police violence against pro EU-protesters on November 30, when the strongest clashes occurred.

The two sacked senior officials are being investigated on suspicion of abuse of power in the crackdown.

Their dismissal is not appeasing the pro-EU protesters, who are demanding that all those involved in the crackdown be dismissed and punished. They also want Yanukovych and the government to resign.