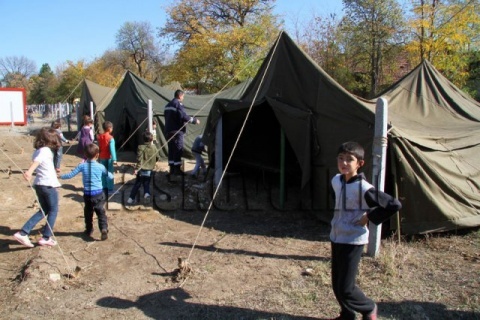 Children hang out in the tent section of the refugee shelter in Bulgarian town of Harmanli. Photo by marica.bg

The International human rights organization "Amnesty International" has strongly criticized Bulgaria for the treatment of refugees.

In a briefing published Friday, under the title "An International Failure: The Syrian Refugee Crisis," the organization details how European Union (EU) member states have only offered to open their doors to around 12 000 of the most vulnerable refugees from Syria: just 0.5 per cent of the 2.3 million people who have fled the country.

European leaders should hang their heads in shame over the pitifully low numbers of refugees from Syria they are prepared to resettle, said Amnesty International.

Below is the section on Bulgaria:

In Bulgaria, an estimated 5,000 refugees from Syria arrived between January and November 2013. The majority are housed in emergency centres, the largest of which is in the town of Harmanli. It is effectively a closed detention centre.

Amnesty International found refugees living in squalid conditions in containers, a dilapidated building and in tents. There was a lack of adequate sanitary facilities with limited access to food, bedding or medicine.

A large number of people were in need of medical care, including some injured in conflict, individuals suffering chronic diseases and those with mental health problems.

Some of the refugees in Harmanli told Amnesty International that they had been detained for over a month.

"Tens of thousands are risking perilous journeys by boat or land to try and reach Europe. We have seen hundreds lose their lives in the Mediterranean. It is deplorable that many of those that who have risked life and limb to get here, are either forced back or detained in truly squalid conditions with insufficient food, water or medical care," said Salil Shetty."