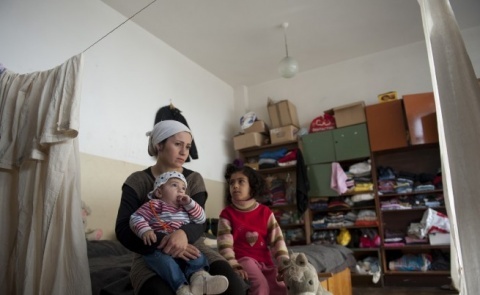 Albeit small on global standards - some 10 000 refugees are currently in the country - the migration wave is unprecedented for Bulgaria as it has the capacity to accommodate about 5 000. Photo BGNES

About 50 foreigners, mainly Syrians, have staged a protest rally in front of the shelter in Sofia's Ovcha Kupel district Thursday evening.

They chanted "We want status," referring to the slow procedures for processing documents and granting asylum status in Bulgaria. Many of the refugees took their children outside, although the temperature in the city was around zero C.

The security of the shelter has managed to keep the situation under control.

Earlier in the day, there was a fight in the facility. According to the press office of the Interior Ministry, at 2:30 pm the Metropolitan Police were alerted about the brawl at the Home for Temporary Accommodation of Foreigners in Ovcha Kupel.

Two 25 -year-old male Syrian citizens first started a dispute, and then fought with the guard. One of them is accommodated at the shelter and the other lives at an external address, but wanted to go back to the refugee center. The altercation occurred after he was denied admission and it led to a scuffle with guards.

The two Syrian nationals were arrested. Two guards were seen by a doctor. The probe in the circumstances of the case continues.

The country is the gateway to the European Union for refugees fleeing Syria via Turkey, many crossing the border illegally. It has shown both the lack of preparedness of state institutions to accommodate the refugees, as well as the latent xenophobia of parts of Bulgarian society.

Interior Minister Tsvetlin Yovchev proposed a plan for reducing the number of illegal immigrants as along with asylum seekers from Syria, a large number of people from North Africa and the Middle East also cross the southern border with Turkey. The plan includes deportation of the latter.