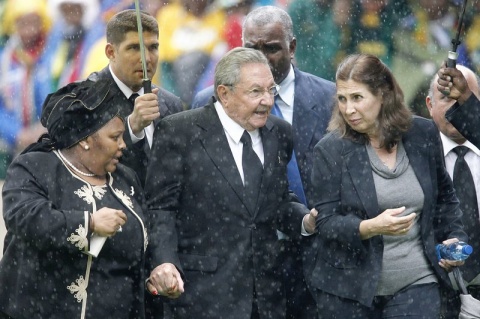 Cuba's revolution leader and former president Fidel Castro had a deep link to Nelson Mandela... The Cuban people have a special place in the hearts of the people of South Africa," said Raul, as reported by SAPA.

The Cuban President recalled a trip by Mandela to his country in 1991, and said a “bond of perfection” had been forged between Mandela and Fidel Castro during the visit.

"This representes a symbol of the fraternal connection between Cubans and South Africans, he said.

According to Castro, Mandela left "an insurmountable example to Latin America and the Caribbean”.

Mandela had taught these nations that it was only though dialogue and co-operation that conflict could be resolved, Castro said.

"Nelson Mandela will not go down in history for the 27 consecutive years he spent incarcerated, without ever renouncing his ideas," stressed Cuba's President, as reported by RT.

"He will go down in history because he was capable of cleaning up his soul from the poison that such an unfair punishment could have planted there, and for his generosity and wisdom, which at the time of victory allowed him to lead with great talent his selfless and heroic people knowing that the new South Africa could not be built on hatred and vengeance."

During the memorial ceremony at the FNB Stadium in Soweto, Raul Castro and US President Barack Obama greeted each other with an unprecedented and historic handshake.