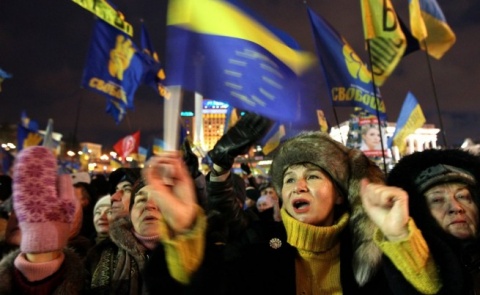 Ukraine's Security Service has opened an investigation into alleged attempts of politicians to seize state power.

In a Sunday media statement, Ukraine's State Security Service announced that it had launched pre-trial proceedings against an unspecified number of unnamed politicians for "attempting to seize state power."

The announcement came against the back drop of a massive pro-EU rally on Kiev's Independence Square.

Hundreds of thousands of protesters gathered Sunday in Independence Square to vent their anger at President Viktor Yanukovych's government over its recent decision to back out of a strategic deal with the EU.

Protesters succeeded in barricading a part of the government building.

The demonstrators are seeking the resignation of the government and early presidential and general elections.

The protest is expected to summon 1 million participants.

Meanwhile, a counter-rally of supporters of Yanukovych was held in the Mariyinsky park, with Ukrainska Pravda saying that it was attended by 15 000.