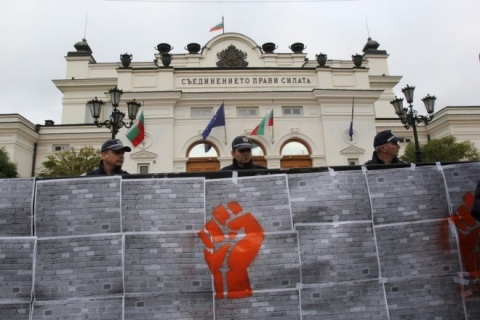 Bulgarian Parliament in downtown Sofia has been guarded by security fences and riot police ever since June when antigovernment protests started. Photo BGNES

They plan to plaster the security fences around the headquarters of the Parliament in downtown Sofia with messages to politicians.

The students spoke before Nova TV, saying their messages and issues pertain to every Bulgarian and human being.

The protesting students further informed they will celebrate inside the campus of the country's oldest and most prestigious school, Sofia University, and were adamant they will not be drinking alcoholic beverages.

They reminded that back at the end of October, when they occupied the main building of Sofia University they voted not to bring and use alcohol.

The university students are demanding the resignation of the Socialist-led government of Prime Minister, Plamen Oresharski.

The first of the protests began when students occupied Lecture Hall 272, the largest teaching room in Sofia University St. Kliment Ohridski building on October 22. The occupation is now lifted and there is only a partial blockade of the building's aula.

Protesters against the Oresharski cabinet first walked out, June 14, after the appointment of controversial media mogul Delyan Peevski for head of Bulgaria's State Agency for National Security.

Peevski's reinstatement as MP after his resignation from the Security Agency provoked a student occupation at Sofia University, which culminated in Sunday's "March of Justice."

Protesters have claimed that the Oresharski cabinet, backed by the Bulgarian Socialist Party and the liberal Movement for Rights and Freedoms exemplifies in an acute form the deep influence of the so-called Bulgarian oligarchy on politics.

Rallies, although much smaller in numbers, are still held every evening in downtown Sofia.